By Marc Kloker
For The Courier 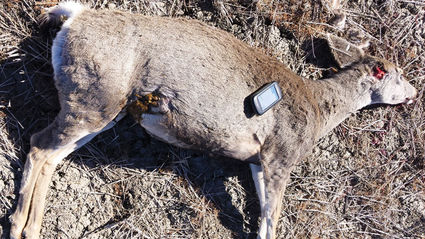 One of the two does found by game warden Todd Tryan.

One of the two does found by game warden Todd Tryan.

Montana Fish, Wildlife and Parks game wardens are seeking any information regarding multiple mule deer killed in McCone County in the evening hours of Sat., Oct. 14. At least eight deer were found, including one fawn still barely alive, that were shot with a shotgun. The deer were found scattered over two miles near road 528 in northern McCone County, on the north end of the Remuda Twitchell BMA, about 10 miles east of Hwy 24.

A local resident reported the dead deer early Sunday morning to the area Block Management Technician Dave Walter, who then contacted local warden Todd Tryan. Tryan spent most of the day Sunday gathering evidence at the crime scene. Four mule deer fawns and two does were found dead. One fawn was found still alive, and had to be dispatched by Tryan. The buck was found on Monday morning, and FWP personnel are still searching for more injured or dead deer.

"I've seen senseless killing before in my 10 years, but this incident ranks right up there among the worst," said Tryan. "I'm also tired of having to put wounded animals like that fawn out of their misery, all because of blatant disregard for Montana's public resources."

Along road 528 near the incident, 22 spent 12-gauge shells were found, and all were of a load typically used for pheasants.

"This type of cartridge would never be used for big game, so these animals likely suffered considerably," said Tryan. "With the number of spent shells found, there could very likely be many more deer that were injured or have since died. We are still looking."

"This was a completely senseless and pointless act of killing Montana's game animals needlessly and illegally," said Region 6 warden captain Ron Howell. "The individual(s) that did this are poachers. Hunters didn't do this. We challenge the public to help provide more information on this case and others, so we can hold these individual(s) accountable for their actions."

The 1-800-TIP-MONT program is a toll-free number where one can report violations of fish, wildlife or park regulations. Callers can remain anonymous and may be eligible for a reward up to $1,000 for providing information that leads to a conviction.