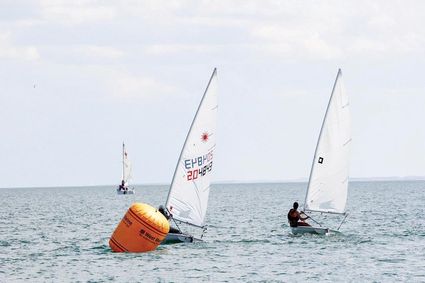 The weather on the lake this past weekend, Aug. 12-13, provided sailors with a wide variety of conditions to compete in. At its most challenging, they battled 4-foot rolling waves as they attempted to harness winds that gusted to 30 miles per hour on Saturday. The strong wind and waves were difficult to handle for smaller vessels and at one point a competitor in a Laser capsized. The winds varied throughout the day, and eventually would die down to the point that they were too weak to carry sailors to the finish line for the day's final race. Issues with the weather continued into Sunday as a heavy fog set in on the lake forcing the cancelation of all but the final race.

A total of 10 sailboats entered this year's Regatta. Although the number of boats competing declined from last year's 14, the Fort Peck Sailing Club was pleased to see an increase in its members entering the race.

The races were split into three different classes based on the size and type of boats. The Keel Boat class consisted of the larger boats that had a crew of two to four people aboard to operate them. The overall winner in this class was Jason and Elisa Sigmundstad on their Catalina 22 "Ilene."

The smallest class was composed of just two boats, a Laser Radial and a Hobie Class. Winning in this class was newcomer Marina Matheson. Matheson got her first taste of sailing only a few months ago during the club's Summer Sailstace. She was aboard Rafe Sigmundstad's boat, a Catalina 30 dubbed "Isla Bell," where at some point during the voyage, Sigmundstad let Matheson take the wheel, from which point she was hooked.

The final class was the Laser, which is the most common sailboat used for racing. Lasers are used for Olympic competition and several other competitions around the world. All Lasers have uniform dimensions and require a lot of skill and athleticism to operate. Winning this class was avid sailor Caleb Gilliam. Winners in each class received a race timing watch and other sailing paraphernalia.

The event was made possible with the help of several local sponsors and several volunteers, including race official John Cormack and his wife Jane, Sara Herman and Harold and Joanne Gilliam. Dallas O'Connor donated his house boat for use as a committee boat. The hospitality from the Fort Peck Marina was also greatly appreciated as they hosted an auction, steak dinner and jam session that was open to the public as well as a served as the base of operations for the event.

The Fort Peck Sailing Club is actively recruiting members to join its ranks. The cost of membership is $50 for a family, which includes training and use of some of the club's sailboats. Sailing is often misconstrued with being an expensive hobby. Firmly believing that sailing is the most exciting thing happening in the area right now, former Club Commodore Rafe Sigmundstad asserts the cost for a sailboat can be very reasonable. He got his start sailing on a Laser purchased for $300 from his neighbor, and was quickly hooked after learning how to operate it by watching YouTube videos.