By Susan Fast
For the Courier 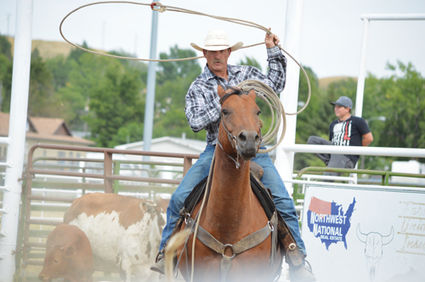 Georgie kulczyk / the courier Lorin Larsen of Terry works to rope a calf inthe trailering competion during the ranch rodeo held July 29. Larsen rode for the Reid Ranch / Stensland Land & Livestock team during the event, which was held at the Valley County Fairgrounds. Larsen and his team placed second just five points behind the Salveson Ranch team.

A small crowd gathered to watch the Old Mil Ranch Rodeo held at the Valley County Fairgrounds on July 29.

The ranch bronc riding was won by Avery Gurney from Sidney with a 69. Ty Murphy from Saco took second-place with a 68 and Daulton Peterson from Glasgow took third with a 67.