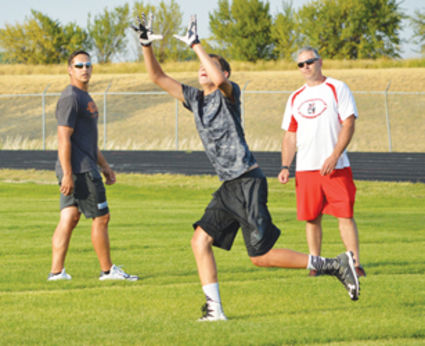 Tuff Harris (left) and Greg Liebelt (right) watch as Keigan Skolrud (center) reaches to catch a ball during a drill at the Scottie Football Camp held July 25, 26 and 27. The camp hosted 43 participants from the Glasgow area and featured Harris, who is a former Pittsburgh Steeler and Griz All-American, and head coach for Montana Tech, Bob Green. Liebelt, who is the head coach for the Scotties, said, "Both the kids and coaches benefited greatly from the information provided by both Tuff Harris and Bob Green. It was a great way to jump-start the 2017 for everyone in attendance."