Reds' Season Ends With Loss to Laurel at District Tournament 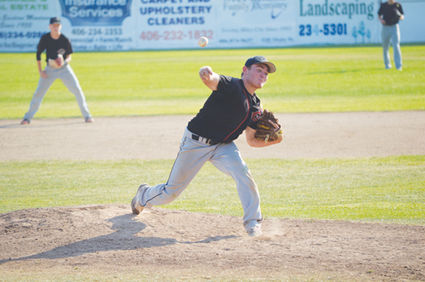 Kevin McDonald throws a bullet during the district tournament held in Miles City. The Reds were eliminated from the tournament following a loss to the Laurel Dodgers.

The Glasgow Reds' season came to an end at the district tournament in Miles City this past weekend. The tournament began for the boys on July 20 with a game against the hosting Mavericks, and ended on July 22 with a loss to the Dodgers out of Laurel.

The Reds did knock Glendive out of the tournament on Saturday morning with an 8-7 win. While the Blue Devils' emotions got the best of them and resulted in both coaches being ejected, the Reds kept their heads in the game and earned the win.

Although the Reds managed three hits in the game and turned a pair of double plays, they were unable to score a run and fell to the Mavericks 4-0.

On the hill, Darrin Wersal pitched the entire game and took the loss for the Reds. He allowed four runs and five hits and struck out one.

The Reds played their final two games of the season the following day. Their first game of the day was against the Glendive Blue Devils, and despite four errors in the contest, the Reds defeated their opponent 8-7.

Glasgow scored the first run of the game in the top of the third inning when Glaser hit a single with two men on base.

In their turn at the plate, the Blue Devils earned two runs off a single, following a wild pitch that loaded the bases.

Glasgow gained the lead in the top of the fourth with a five-run scoring streak. The big inning for the Reds began with an error that scored Kevin McDonald, and two runs scored off two separate wild pitches. Glaser drove in two runs off a single followed by a double hit by Wersal that brought Glaser home.

Glendive closed the gap with one run in the bottom of the inning, and three more runs in the fifth after the Reds blanked in their turn at bat.

Heading into the sixth inning, the Blue Devils were faced with just a one-run deficit. Although the Reds added a run in their turn at the plate, Glendive responded with one when it was their turn.

Glasgow held off their opponent, however, and brought the Blue Devils' bid for the district title to an end.

Fossum earned the win for the Reds. He pitched five innings, surrendering six runs, five hits, and striking out four. Chase Guttenberg provided relief on the mound for one inning, followed by Cade Myrick, who recorded the last three outs to earn the save.

Glasgow faced their toughest opponent, the Laurel Dodgers, on Saturday afternoon. Despite a good start for the Reds, Laurel pulled ahead in the second inning and prevented Glasgow from upsetting the higher seed.

Opening the game at the plate, the Reds earned the first two runs of the game when Glaser hit a double to bring in Fossum and Bryce Legare. The Dodgers replied in their turn at bat with two runs to knot up the game 2-2. 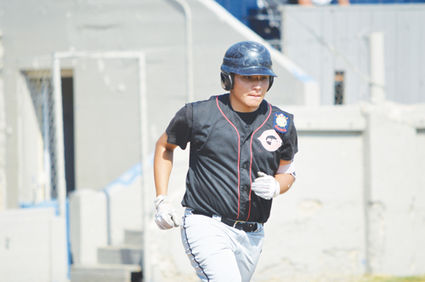 Korbin Cole takes his base after earning a walk during the Reds' game vs. the Laurel Dodgers on July 22.

Glasgow added another run when Legare earned a bases loaded walk that brought in Alex Fransen before the half-inning came to a close.

Laurel took the lead in the bottom of the inning and maintained the advantage for the rest of the contest. With six runs scored in the second, two runs in the third and three runs in the fourth, the Dodgers had a sizeable lead going into the fifth inning. Facing a 13-3 deficit and the possibility of a loss by ten-run-rule, the Reds needed to score in their turn at bat just to stay in the game.

They chipped away at Laurel's lead with one run scored on a Dodger error, and one scored on a wild pitch, but the game came to an end when Laurel answered with two runs of their own in the bottom of the inning.

Price took the loss for the Reds. He went two and a third innings, allowing ten runs, nine hits, and striking out one.