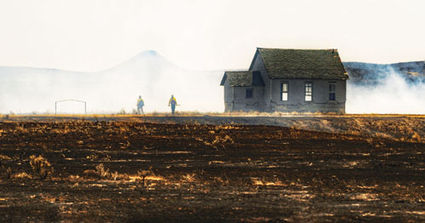 Sean Heavey / For The Courier

Firefighters from around the region help battle the Lodgepole Complex fire.

The Lodgepole Complex fire continues to devour range land, homes, and farms in Garfield and Petroleum Counties, approximately 52 miles northeast of Jordan. At press time, the fires had consumed more than 250,000 acres and 16 homes across four different close burning fires, dubbed the Bridge Coulee, Barker, South Breaks and Square Butte fires, which make up the Lodgepole Complex fires. The fire had started just some six days prior on July 19.

A release on the fire said that, "Firefighters were aided with more favorable weather on July 24, helping to increase the containment to 20 percent." The release also sang the praises of local landowners and crews stating, "The combination of intense initial attack by the landowners and local resources along with the work of fire crews, has halted most of the fire's progress." The blaze is being fought by crews and resources from BLM, US Fish and Wildlife Service, DNRC, Garfield County and Petroleum County.

Currently, evacuations remain in place for Garfield and Petroleum Counties due to the extreme fire behavior and fire movement. An evacuation shelter has been established at the VFW Building in Jordan.

The fire has drawn statewide and national attention. Congressman Greg Gianforte traveled to the Lodgepole fire meeting with local and state officials battling the flames. He talked with officials from Garfield County, the State of Montana and managers from the Bureau of Land Management and the U.S. Fish and Wildlife Service.

Gianforte's office released information in which they describe the following scene, "County officials informed the Congressman that many of the people under evacuation orders are out on the fire line, working shoulder-to-shoulder with firefighters from across the state and the nation who are laboring to halt the progression of the fire. They also shared their concerns about recovery from the damage to structures, range, fencing and livestock." Rep. Gianforte stated, "The most important thing right now is to put the fire out. Then we have to figure out how to help the County."

Senator Steve Daines had also become involved, advocating for the region on the Senate floor by discussing the many fires burning in the state, the tragic loss of firefighter Trenton Johnson and the severe drought facing Montana producers, according to a release from his office.

Senator Jon Tester also took to the Senate floor to call on the Federal Emergency Management Agency to act in Montana. He told his fellow Senators, "Across Montana, over 250,000 acres have already burned and many of these fires continue to rage," Tester added, "Montana's communities are strong, tight-knit, and always persevere, but they expect more from their government. Fires are a devastating natural disaster and should be treated that way."

Tester called for changes to the way fires are handled by the agency and funded by Congress, "As these brave communities and firefighters work around the clock, it's time for FEMA to be accountable to Montana and for Congress to help out," Tester said. "We can do that by fixing how we fund firefighting."

Governor Bullock declared the fire a state of emergency over the weekend. He told Montana Public Radio, "In my discussions with folks on the ground, we are getting the resources we need. Resources are traveling from other places, indeed around the country. Look, it's hot out there in all corners of the state. It's dry out there. For what we have, they're comfortable that we're getting what we need at this point. Now that's not to say that we're not going to have a whole heck of a lot more fires which will even further stretch things."

A local effort to support victims of the fire is underway. Haylie Shipp has organized a trailer, located in the vacant lot next to Taco Shack, in which you can place donations for those affected. They are in need of a variety of items and a list of information can be found on Shipp's Facebook page.