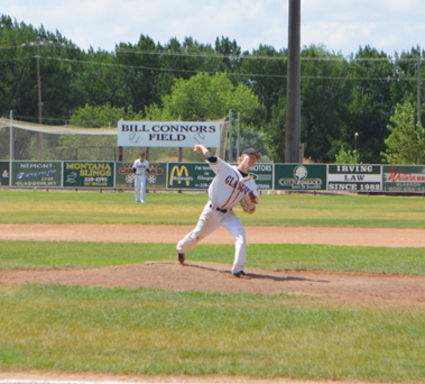 Chase Guttenberg tosses a pitch during the Reds' home game vs. the Billings Cardinals on July 12. Guttenberg earned the save on the mound for the Reds in their second game against the Cardinals.

The Reds faced the Billings Cardinals in two games at home on July 12, and sent them away with two losses.

Glasgow defeated the Cardinals by just two runs in their first match-up of the day. The Cardinals took an early lead against the Reds with two runs in the top of the third inning, but didn't score for the remainder of the contest.

The Reds were able to reply with a single run in the bottom of the fourth. Kevin McDonald was able to get into scoring position with a steal of third base, then advanced home off a balk by the pitcher.

To secure the win, the Reds piled on three more runs in the fifth inning. With the bases loaded off a single and a pair of walks, Cade Myrick brought in two runs with a double to left field.

In the next at-bat for the Reds, Brett Glaser hit a sacrifice fly to center that brought in Bryce Legare.

Following a scoreless sixth inning, the Cardinals had one more opportunity at the plate to score some runs, but were shut down quickly, in part to a double play by Myrick that ended the game.

Kaden Fossum earned the win for the Reds. He pitched all seven innings, surrendering two runs, five hits, and striking out one.

The Reds' second win of the day was punctuated by several Cardinal errors. Those errors, in addition to a good showing at the plate by the Reds, secured a 12-4 win for Glasgow.

The Reds began with a four-run lead in the first inning. While the Cardinals failed to bring in any runs in their first at-bat, Glasgow made good use of their turn at the plate by scoring three runs before Billings could even secure an out. The four runs earned by the Reds in the first inning were scored off a single by Fossum, a double by Legare, a Cardinal error, a single by Glaser, a single by Darrin Wersal, and a pair of walks.

Both teams made quick work of the second inning, beginning with a double play by the Reds to shut down the Cardinals' at-bat. The Reds managed to get on base, but could not bring any runners in before the inning closed.

The Cardinals began a rally attempt in the third inning, scoring three runs and closing the gap in the score. Glasgow responded with two runs of their own in the bottom of the inning, scoring on a string of defensive errors by Billings, including a wild pitch.

Following another single run scored by the Cardinals in the fourth, the Reds plated three more runners to extend their lead even further. All three runs were scored on a bases-loaded error by the Cardinals.

The game slipped away from the Cardinals even further in the final innings, as they failed to add any points to their score, while Glasgow continued to bring in runners.

Alex Fransen earned an RBI in the fifth, and the final runs for Glasgow were scored when Myrick hit a two-run homer to left field.

Once again, the Cardinals had another opportunity at the plate in the top of the seventh inning, but failed to capitalize and dropped the game with a big 12-4 loss to the Reds.

Darrin Wersal earned the win for the Reds. He pitched five and two-thirds innings, surrendering four runs, seven hits, and striking out seven. Chase Guttenberg recorded the last four outs to earn the save for the Reds.