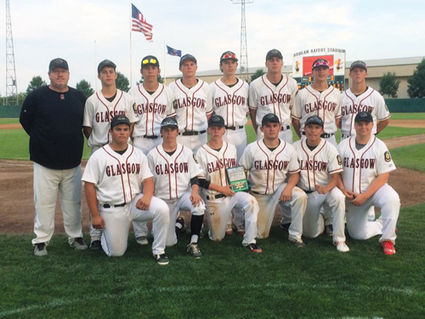 Denise Herman / For the Courier

The Glasgow Reds brought home first-place hardware from the First National Tournament held in Williston July 7, 8, and 9. In their quest for the championship, the boys suffered just one loss.

The Reds faced the Williston Oilers in their first game of the weekend on Friday evening, and despite out-hitting the home team, dropped the game 7-5.

The Oilers grabbed an early lead in the bottom of the first inning, when they claimed two runs off a pair of hits.

The Reds answered with a solid five-run inning, scored entirely from single RBI's and an Oiler error.

Although Williston was unable to answer in the bottom of the second, they hit a scoring streak adding five more runs, while the Reds suffered a dry spell for the rest of the contest.

Both teams recorded several errors. Williston finished with four and Glasgow had nearly double that with seven errors.

The game came to an end after Glasgow failed to add any runs in their turn at bat in the top of the seventh inning.

Darrin Wersal took the loss on the mound for the Reds. He threw six innings, giving up seven runs, eight hits, striking out three, and walking zero. Cade Myrick and Brett Glaser led in hits with two each.

In their second game of the tournament, which they played on Saturday, Alex Fransen tossed a shutout for the Reds against Bismarck. Fransen pitched all seven innings, surrendering zero runs, six hits, striking out three, and walking one.

The game was a stalemate until the fifth inning when the Reds finally brought in a run off an RBI single by Chase Guttenberg. Another run was added in the sixth when Glaser scored off a wild pitch and a dropped third strike.

Myrick increased the Reds' lead when he hit a three-run homer to left field. In their last opportunity at the plate, Bismarck failed to bring in any runners and the game ended with the Reds on top 5-0.

Just days after facing them at home, the Reds were matched up agains the Sidney Patriots for their third game of the tourney on Sunday morning. Following a scoreless first inning, the Patriots had a big second inning, bringing in six runs. The Reds brought in none.

The third inning was a scoring reversal, as Sidney failed to bring in any runners, but the Glasgow boys scored five big runs. A string of singles loaded the bases for Bryce Legare, who doubled to right field and brought in two runners.

Myrick followed Legare with a two-run single to short, and another single by Glaser scored the fifth run for the Reds.

Innings four and five were defensive battles by both teams, with each inning consisting of just six at-bats.

The Patriots were finally able to tack on another point when they scored off a tag-up in the top of the sixth inning and extended their lead to 7-5.

The Reds had a huge response in their turn at the plate, scoring eight runs to take the lead. They did it the hard way, scoring each run off a single.

Fransen began the scoring run with a single to third that brought in Wersal. Korbin Cole followed up with an RBI single to short that scored Kevin McDonald.

Legare brought Cole home with a single to short, and loaded the bases for Myrick's turn at bat. With the seventh single hit in the half-inning, Myrick recorded an RBI and Guttenberg scored.

With the bases loaded, Glaser stepped into the batter's box and knocked a two-run single to right field, scoring Noah Lipszyc and Legare.

The Reds scored their seventh run when Myrick stole his way home from second base. Glaser also put himself into scoring position with a steal of second, then an advance to third with a tag-up.

A single by McDonald scored Glaser for the eighth and final run of the inning.

The Patriots had one last opportunity to add to their score in the seventh inning, but were unable to capitalize fully, scoring just two runs before the Reds shut down the game.

McDonald earned the win for the Reds on the mound. He went six innings, giving up seven runs, nine hits and striking out four. Guttenberg recorded the last three outs to earn the save for Reds.

In their final game of the weekend, the Reds defeated Bismarck for the second time, earning them the championship.

Glasgow jumped out to an early lead in the first inning, scoring five runs to Bismarck's two. The Reds' big inning was driven by a bases-loaded tag-up score by John Cremer, a single RBI by Wersal, a steal of home by Myrick, and a two-run single by Guttenberg.

The next four innings were scoreless, but punctuated by some good defensive plays. In the second inning, the team traded double plays, and the Reds recorded a second double play in the third inning.

In the top of the sixth inning, with Guttenberg in scoring position at third, Myrick hit a double to center field and earned the RBI.

Bismarck shut down the Reds' at-bat, and brought in a run of their own in the second half of the inning.

Two more runs by the Reds would extend their lead over Bismarck and clinch the win with an RBI single by Guttenberg, and a passed ball allowing Fransen to score. Another great defensive double play by Glasgow made quick work of the second half of the inning, and Bismarck failed to score. The game ended with the Reds on top 8-3.

Kristian Price earned the win for Reds. He threw five-and-one-third innings, allowing three runs, eight hits, and striking out one. Myrick recorded the last five outs to earn the save for the Reds.