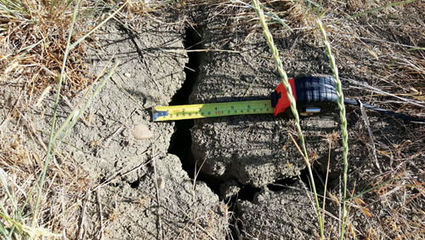 Mike Fransen / For the Courier

The ground in Northeast Montana is cracking under extreme drought conditions.

On June 24, Governor Bullock issued an Executive Order declaring a drought emergency for various counties, including Valley and Roosevelt. The counties under this emergency have seen record low precipitation, high temperatures and excessive winds over the past two months. These conditions have deteriorated crop and forage viability.

Farmers and ranchers were confident in the successfulness of the season due to the amount of moisture that was received from October through December last year. Per the National Weather Service in Glasgow, the amount of precipitation from January to April was near-normal.

During the month of May, that precipitation screeched to a near halt, and the ground started to dry up. In May alone, 8.58 inches of soil moisture was evaporated out of the ground, which is a lot when only 12 inches of moisture is provided in a year. Year-to-date Glasgow has had 2.74" of liquid when the normal is 5.82."

The average wind speed for this time of year is 10.2 mph. However, there were eight days in June where winds were over 40 mph and 18 days where winds were over 30 mph. These high winds, combined with the high temperatures, aid in quickening evaporation of soil moisture and prevents the moisture in the air from being able to penetrate the ground.

"In order to make moisture, we need moisture," said Meteorologist-In-Charge for the National Weather Service in Glasgow Tanja Fransen. "Without moisture, clouds can't form, and without clouds, rain can't form. The wind has evaporated the little rain potential we have had."

Since the Drought Monitor was started in 2000, these are the worst conditions Northeast Montana has seen.

The onset of drought became most notable when reports indicated that producers are selling off cow and calf pairs. Crops such as oats, spring wheat, edible dry peas and sugar beets are all suffering. According to the Crop Progress Report on June 18, pasture and range conditions are poor to very poor. Ranchers are also reporting extreme dust has made it difficult to keep track of all livestock, even during branding.

The drought is not only affecting ranchers and farmers in the area. Residents who want to relax around a bonfire, have a campfire or shoot off fireworks during the upcoming holiday weekend, need to be aware of red flag warnings. As conditions become even drier and blustery, the danger for a wildfire increases and affects the behavior of existing fires. If you are planning on doing any burning, exercise extreme caution. Never leave a campfire or bonfire unattended and make sure the coals are cold to the touch before leaving. Some counties have also issued burn bans, so be sure to check with local law enforcement if your county is affected. As of press day, the 4th of July fireworks show at the fairgrounds will still occur, with the Long Run Fire Department safely lighting them off.

The state drought advisory committee appreciates feedback on what impacts farmers and ranchers are facing. Submit your comments via email from the link on the State of Montana Drought page dnrc.mt.gov/divisions/water/drought-management and also submit to the national Drought Reporter at droughtreporter.unl.edu/submitreport/.