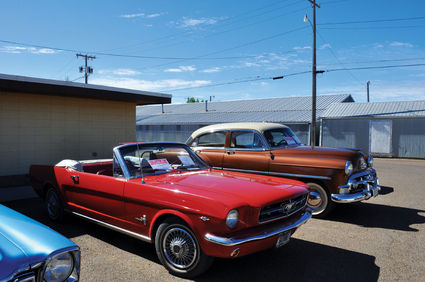 The Flatland Cruisers Car Club put on their yearly Father's Day Show 'n Shine car show at the Elk's Lodge on June 18. A wide variety of classic cars were on display, 67 to be exact, allowing car enthusiasts to compare notes with each other and allowing the general public to ohh and ahh.

The majority of the cars in the show were owned by residents of Glasgow or Nashua, while four cars made the drive from Wolf Point to participate. Motorcycles were also available for the public's viewing pleasure.

Many families were seen walking around outside of the Elk's, enjoying food and drinks provided by Danny Diner, owned by Dan Taylor and his son, Kevin, participated in the 50/50 raffle, which was won by Jack Brooks of Glasgow, and enjoyed, and voted on their favorite car. This was the second year spectators had the ability to choose their favorite car in the show. The People's Choice was won by Lorrie Sampson of Glasgow with his 1929 Ford Model A. "It was a good turnout of spectators," said Doris Leader, secretary/treasurer of Flatland Cruisers Car Club.

According to the President of the Flatland Cruisers Car Club Curtis Leader, classic cars will also be on display during the Northeast Montana Fair on Aug. 5 through the 8, in the Valley Event Center. Members of the club will also participate in the Montana Warriors on the Water event, where they will drive veterans from the marina to the Fort Peck Hotel for the festivities on Friday, July 14.