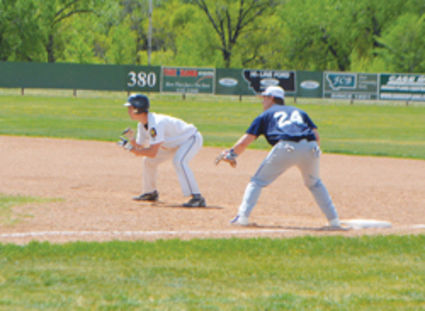 Reds catcher, Bryce Legare (l), gets a lead off of first base during a game held in Glasgow earlier this season.

The Glasgow Reds put in four days of baseball over the weekend and came home with three wins. The Northstars Memorial Tournament was held in Havre June 8-11.

In their first of four games, the Reds faced the hometown Havre Northstars Thursday evening. Cade Myrick worked on the mound for all four innings of the game and earned the win for the Reds. Out of 75 pitches, he gave up just one run and one hit, and struck out eight.

At the plate, Kaden Fossum collected three hits in his three at-bats, followed by Darrin Wersal with two hits. Myrick hit a double with the bases loaded in the top of the third and brought in three runs, while Wersal recorded two RBIs when he hit a ground ball to center field in the top of the fourth.

The Northstars were able to bring in a run on a two-out single, but the Reds closed out the inning, and the game, in the next at-bat.

The Reds fell just short of a win in their second game of the weekend the following evening, losing to the Great Falls Outlaws 8-7 after five innings.

Glasgow gained an early lead in the first inning thanks to an Outlaw error that scored two runs for the Reds.

In the second inning, Glasgow scored another three runs on a passed ball and a single by Brett Glaser.

With Glasgow up 7-2 going into the fifth inning, a win for the Reds appeared probable. Unfortunately, the Outlaws took advantage of a string of Reds' errors to score six runs and earn the win.

Wersal led the Reds at the plate with three RBIs off one hit, followed by Glaser with his two game RBIs.

Bryce Legare and Wersal both hit doubles in the contest, with Wersal bringing in the final runs for the Reds in the fourth inning.

Alex Fransen took the loss for the Reds, pitching most of the five innings and facing 90 batters. He gave up eight runs, nine hits and struck out four. Kristian Price provided relief on the mound in the final inning and faced 10 batters.

On Saturday afternoon, Glasgow took on the Scobey Blues and finished with their second win of the weekend.

Wersal pitched all five innings for the Reds and earned a shut out, allowing just three hits and striking out five.

Glasgow took an early lead in the game when Kevin McDonald brought in three runs off a double.

Neither team could manage a run in the next three innings and the game entered the final inning with Glasgow on top 3-0.

The Reds had a big fifth inning, scoring five runs thanks to a walk, a double by McDonald, a walk, and a single by Fossum.

McDonald led the Reds at the plate with five RBIs and two doubles. In the third inning, Taylor Johnson and Wersal executed a great double play in the Blues' second at-bat.

The Reds played their final game on Sunday morning and finished out the tournament with their second shut-out win over the Ft. MacLeod Royals of Alberta, Canada.

Brett Glaser earned the win on the mound for Glasgow, allowing just three hits in the game and striking out seven Royals. He threw the full six innings, tossing 110 pitches.

The Reds won the game with a steady stream of runs, led by McDonald who hit a double in the first inning that brought in Glasgow's second run. Also recording RBIs in the game were Fossum and Johnson.

The Reds will be in Lewistown Thursday - Sunday, June 15-18 for another four-day tournament followed by a double header in Sidney on Tuesday, June 20.