By Josie Braaten
The Courier 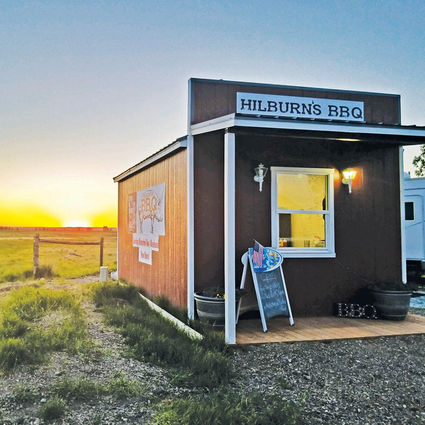 Don't miss Hilburn's BBQ next to the Lakeridge in Fort Peck. Now serving breakfast sandwiches on Wednesdays and Fridays thru Sunday.

It sprang up seemingly overnight. A miniature building in a corner of The Lakeridge's parking lot, with a massive "Hilburn's BBQ" sign strung across its deep red siding. The little building, home to the soon to be famous "Papa's Sauce," is owned by Kayla and Trey Hilburn of Sidney Mont.

Although the couple met and continued to live in Sidney while working the oil fields, Trey is originally from south Georgia. "He was a great cook when we were dating," said Kayla, "I told him it was really good and that he could open a restaurant, but he never believed me." However, after Trey's father passed away in February of 2016, the oil field lifestyle they shared began to wear on them, and suddenly the idea of opening a restaurant didn't seem so preposterous.

They wanted their cuisine to channel Trey's southern roots with authentic, home-style, Georgian BBQ. The emphasis being on home and Trey's desire to share his southern family heritage with eastern Montanans. Already, the stand is doing just that, with its staple BBQ sauce, "Papa's Sauce," a Hilburn family heirloom passed down from Trey's grandad who also owned a roadside BBQ stand. Along with the homemade sauce, all the BBQ-ed beans, potato salad, and coleslaw at Hilburn's BBQ are made from scratch using other tried and true family recipes.

Family history isn't the only factor influencing the menu at Hilburn's BBQ though. According to Kayla, it was her son Erin's idea to serve grilled cheese sandwiches at the stand as an option for younger diners. Kayla's mother (Tina Strauser) then had the idea to top the sandwich with pulled pork and, of course, a dash of "Papa's Sauce," to create one of the best-selling items on the menu. Other popular menu items include the Heavenly Hog loaded baked potato (Kayla's personal favorite), the best-selling breakfast burritos and fresh off-the-griddle breakfast sandwiches.

In addition to being based in family tradition, the daily operations of Hilburn's BBQ are most certainly a family affair. Trey, who continues to work the oil fields during week days, makes the drive to Ft. Peck to work weekends at the stand. Kayla, along with her mother and 10-year-old sons (Aaron and Nathan), hold down the fort during the week. "My mother has been an amazing help and support through all of this," stated Kayla. In addition to running the stand during business hours, holding down the fort entails the hours of food prep all the made-from-scratch recipes require, and child care for the couple's two youngest sons ages 1 and 5. Regardless of the long hours, Kayla loves that the work at the BBQ allows her to spend more time with the boys, and she emphasized how the team effort to make the stand a success has brought the family closer together.

Kayla spent her childhood summers on Ft. Peck lake and now, Kayla and Trey are proud to be working with other Ft. Peck business owners to make the lake an even more special destination for vacationing families, fishers, hunters, and locals. What is surely the first of many examples of such business comradery is the crawfish boil at the Marina on July 1.. Hilburn's BBQ will be responsible for the boil itself, overseen by Trey, an experienced cook and eater of crawfish. The Marina will provide drinks while Dudely and the Deadbeats will provide the music of course.

Despite the intensity of starting a new business with a young family, the couple is thrilled to be doing what they love while giving back to a community that they've fallen in love with. "I've never met a community like this before," said Kayla of the welcome and support from the Ft. Peck and Glasgow areas, of which she and Trey are extremely thankful for.