Reds, Mavericks Each Claim A Win 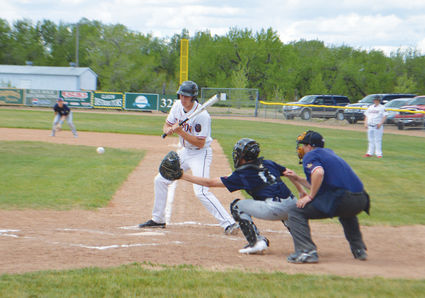 Alex Fransen rejects a pitch during the first game against Miles City on May 14. The Reds were 1-1 on the day.

The Glasgow Reds opened their season with two games against the Miles City Mavericks on Mother's Day, May 14.

In their first game, the Reds fell to the Mavericks 9-3. Miles City claimed the lead early with a first-inning double that brought in one run. Glasgow was unable to answer, and the Mavericks extended their lead in the third inning with six more runs, assisted by a few Red errors. John Cremer was able to score on a passed ball to deny a shut-out.

The Mavericks scored again in the fourth while Glasgow continued to falter and finished the same inning without bringing in a run.

In the bottom of the fifth, with Miles City on top 7-1, the Reds had their best opportunity to rally, but were unable to capitalize. They did bring in two runs with Taylor Johnson earning a walk to bring in Cade Myrick and Kristian Price with a line drive single that brought in Korbin Cole.

The contest continued for the full seven innings, but scoring stopped in the sixth when the Mavericks brought in their final run.

Johnson and Price each drove in one run, and Myrick had one double in the game.

In their second game of the afternoon, the Reds shook off the cobwebs and came back strong to defeat the Mavericks in five innings.

Miles City began the game with a scored run off a Reds error, but Glasgow answered with a run in their turn at the plate and the first inning concluded with both teams on the scoreboard, 1-1.

The second inning was dry for both teams offensively, with neither bringing in a runner.

With two outs on the board, the Mavericks scored a run off of an error before the Reds could shut them down.

Riding on a wave of walks and singles, capped off by a steal of home by Darrin Wersal, Glasgow racked up 11 runs in their turn at bat before the Mavericks could shut them down.

Miles City scored two runs in the fifth, but the Reds answered with three runs in one play to invoke the ten-run rule and claim the victory.

Wersal was the winning pitcher for the Reds, pitching all five innings. He gave up three runs, six hits, and struck out one.