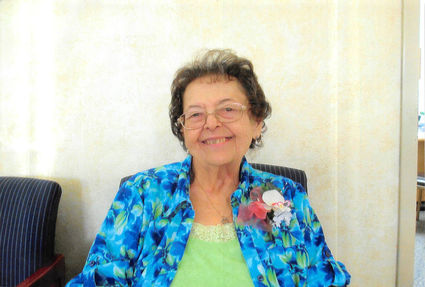 On the evening of Thursday, May 11, 2017, Mary Ann (Yassen) Clem, 76, passed into glory at the home of her dear friends, Cliff and Dianna Isakson, in Glasgow, Mont., from renal failure.

A memorial service will be held on Friday, May 19, at 11 a.m., at the Bell Mortuary in Glasgow followed by a reception at the Glasgow VFW (Fort Peck Post 3107).

She was born in Sioux City, Iowa, on June 15, 1940, to Jess and Alice (Flick) Yassen. She had one older brother, Ed. She graduated from Central High School in 1958 in Sioux City. She was cruising around the city when Frank spotted her. He said, "You, in the middle, let's go on a date." They spent many dates bowling. She and Frank soon married in the Spring of 1959.

Frank's duty in the U.S. Air Force landed the newlyweds in Valley County. They had three children. Frank always said he had four kids. Mary Ann loved to play! Swimming, volleyball, bowling, board games and card games, she enjoyed them all, and she kept playing when grandchildren came along. She played with plastic and plush animals with Alexie and Brianne, Hot Wheel cars with Shyanne and Barbies with Caite. She was a dedicated Jeopardy fan, watching her favorite TV show for five decades.

In the 70s, she operated Clem's Pilot Car Service. This was her favorite occupation. Her husband would haul mobile homes across the northern states and she would lead the way. She was an avid CB radio user. She was well known as Cactus.

She worked in the bakery department for Buttrey Foods for a brief time. Her next career was with the US Postal Service as a rural mail carrier. She earned achievement awards for her excellent service. We are not sure what she enjoyed most, delivering the mail or giving treats to the dogs on her mail route. She often delivered home-baked cinnamon rolls to the Valley County Road Department as insurance that her country roads would be passable. She retired from the postal service.

She was a den leader for Boy Scouts. She was active in the Glasgow Schools' PTA. She was a member of the local CB radio club. Her pretty voice helped many travelers. She and Suzi Frost spent hours and hours together driving around Glasgow running errands. Mary was the youth group leader at Calvary Baptist Church for quite a few years. Many of the youth stayed in touch with her as adults.

She and Frank were married for 43 years. A few years after Frank passed away, she moved to Billings. She lived there with her son, Frank E., and Marie for five years. Marie is the Clem family's Jersey angel.

In June of 2013, Mary came back to Glasgow and resided at Nemont Manor. She soon had a circle of friends to play pinochle with. She also hosted a weekly Bible study in her apartment. As the years went by her love of the Lord increased. Her daily Bible reading brought her boundless joy. If she said she would pray for you, be assured she did. Frank Jr. said she had a direct line to God.

Her gift was hospitality. She loved to give to others what she knew made them happy, especially in the food department. Everyone was welcome at her table.

She was a frequent patient at the Glasgow Clinic. Bob "Sparky" Hanson, Dr. Janet Armstrong, Patti Fogle and Darci Ellefson were not only caregivers, but friends. Mary's family would like to say thank you, a very sincere thank you, to them and the others who gave Mom such superior care.

She was preceded in death by her husband, Frank A. Clem; a son, Frank E. Clem; and one brother, Ed Yassen.

Bell Mortuary is assisting with arrangements.