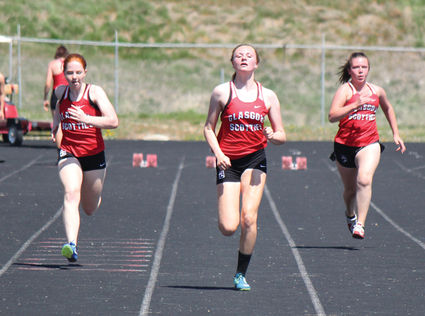 A trio of Scottie tracksters competes in the 100m dash at the Jean Dreikosen Invitational Meet held in Glasgow May 6. Pictured (l-r): Ayla Stone, Lauren Padden and Nataliya Melnyk.

The Scottie track team has been busy, with three separate meets held in the last week. The competitions began with the top ten meet in Glasgow on May 2.

The meet weather was miserable, with wind, rain, and a significant delay due to lightning in the area. Despite that, according to head coach Tim Phillips, there were good performances. Two meet records were broken – Benji Phillips extended his already-standing record for the javelin with his 195-09 throw and Garrison Hughes of Sidney snagged the meet record, as expected, in the pole vault. His 15-02 vault bested the vault record previously held by current assistant Scottie track coach, Kirk Capdeville.

Merlin and Ellis McKean both qualified for the 3200m run at the meet – the first time Glasgow has had a state qualifier in the event. Wilson Overby set a nine-second p.r. in the same race. "He's the fastest freshman I've had in the 3200 and I'm still looking for more improvement," said Phillips.

Cade Myrick and Alec Boland highlighted the boys 800m run. "Cade competed really well to win the 800," explained Phillips, "but we've got to get him faster if he wants to place at state. Alec had a huge p.r. He took off nearly six seconds and competed the whole way."

For the girls, Emily Kolstad, Brinlie Nielsen and Brooke Westby had some good performances. "Emily ran a really good time in the 400m and Brinlie had a three-second p.r. in the 800m," said Phillips.

Phillips points out Brooke Westby's 3200m run as one of the "guttiest" performances. "She's been very limited in training," he explained, "but she came in and competed the whole way, set a four-second p.r. and got fourth. That was a great display of guts!"

Phillips said although Leinie Hughes didn't have her best shot put night, she still placed, then came back and set a personal best in the discus.

"Jordan's (Kulczyk) long jump was really good," he added. "It was nice to see her hit 16 without a tail wind."

"Her javelin throw in Great Falls was great - second best in Glasgow history at 117," he continued, "but what I've liked about what she's done since is that she's stayed mostly above that 100-foot range in varying conditions. She's becoming much more consistent there."

The team was on the road to Wolf Point on May 5, then attended the Jean Dreikosen Invitational on May 6, which was hosted by Hinsdale at Scottie Field. Phillips wanted to give the competitors an opportunity to compete two days in-a-row, something they seldom get to do until the state competition.

"The hot conditions killed some of my distance runners," he said. "We actually trained medium hard on Thursday too, so they were very tired, but did okay for the day."

Tyler Fitzsimmons returned to competition for the Scotties after recovering from an injury early in the season. He ran in the 100m dash, nearly qualifying for the state meet, according to Phillips.

In addition to achieving a p.r. in the 400m, Brett Glaser had a huge triple jump. "He hit 41'10 against the wind," explained Phillips, who also noted that Matt Reyling had a great day at the vault, hitting ten feet. 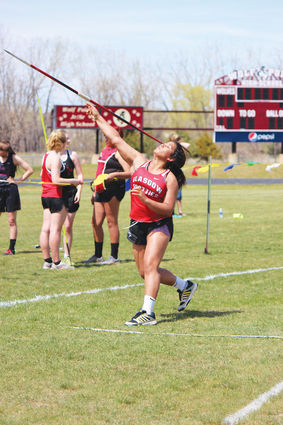 Scottie senior Jazmine Foster-Shaw competes in the javelin at the Wolf Point Invitational held May 5. Foster-Shaw achieved p.r.s in all three of her throwing events this past week.

At the Hinsdale invitational, Phillips noted that the athletes tried some different events. "The kids were very limited in what they did," he said, "but I saw couple personal bests: Caden Gustafson moved up to eight feet in the vault, and Jaysen Turner had a big p.r. in the long jump. For the girls, Tyisha Begs His Own had a great 200 both on Friday and Saturday. Alaina Sallee hit her best in the 300m hurdles, and that was a tough day to do that. Natosha (Sand), Regan (Zerbe) and Jazmine (Foster-Shaw) all had their bests in the shot put. Regan and Jazmine also had their bests in the javelin, despite the wind, so they had great days."

The Scotties will be in Wolf Point Saturday, May 13, for the district meet. The top six in each event there will qualify for the divisional meet in Glasgow on Saturday, May 20. Coach Phillips expects the team to have a great post-season and is hoping for some great fan support at the meet in Wolf Point. Events begin at 9 a.m. at the high school.