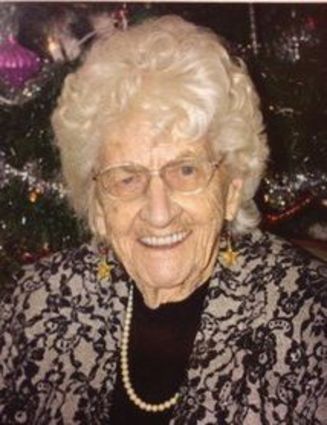 Jane Elizabeth (Fetterman) Knudson 97, passed away on Sunday, April 30, 2017, at Valley View Nursing Home with her daughters by her side.

She was born Oct. 19, 1919, to John and Mary Fetterman at their family home in Saco, Mont., where she was raised and where music was the heartbeat of the family. She began violin lessons at the age of 11, and began playing the trombone at age 14, both of which she played throughout high school at Saco High School, where she graduated in 1937.

She pursued her passion for teaching and music after she graduated from high school by attending Montana State Normal School in Dillon. She continued to play the violin in the All-State Orchestra and Symphony Orchestra in Dillon, and graduated in 1939 with a teaching degree in elementary education and music.

Her legacy for her love of music will continue long beyond the years she spent with us. She was inspired by her mother to be a teacher, who also taught her piano at a very young age, and she obtained her first job after graduating from Dillon as a teacher and band director at Box Elder, where she organized their first band. She then taught fifth and sixth grades in Valier before returning to Saco in 1942.

A year later she married the love of her life, Kenneth Knudson on Dec. 31, 1943, and they settled on their farm west of Saco where they began their family. Although she was still teaching in Saco at the time of their marriage, her teaching career was temporarily put on hold, as they didn't allow married women to teach in the school system. She then focused on raising their four children; Kenneth Max, Mary Sue, Connie and Laurinda.

Even though she lived on the farm, she always considered herself a farmer's wife and not a farm wife. Her greatest joys were brought to her through the love of her family. She returned to teaching in 1963 in Hinsdale where she taught band and fifth grade, until her retirement in 1974.

Her husband, Ken, died in 2002, but she continued to live on the farm until 2011 when she moved to Prairie Ridge in Glasgow. It was with that move that she was no longer able to teach piano lessons, which brought her so much joy throughout her life. In March of 2016, she moved to Valley View Nursing Home where she lived until her passing.

She was a lifetime member of Rainbow Rebekah Lodge in Saco, Delta Kappa Gamma, and Women of the Podium, an organization of women band directors. Throughout her life, she was a committed member of the Saco Methodist Church where she was very involved as a Sunday School teacher, pianist, organist and choir member. She was also a Gold Star mother as a result of the death of her son, Max, in Vietnam March 16, 1966.

She was truly one of a kind. She prided herself in her independence, and her car, a gift from her brother, John, was a symbol of that independence that she held dear her until her passing. She always found a reason to smile and had a way of bringing a smile to the faces of those around her.

She loved playing BINGO, doing crossword puzzles, juggling on-going knitting and crocheting projects, and of course being kept company by any cats that found their way to her. She radiated such a caring heart, whether it was making room at her dinner table, offering advice, lending a listening ear, or being truly engaged in what was happening in everyone's lives, she always made sure those in her life were taken care of.

Whenever friends and acquaintances would greet her and ask how she was, she responded with, "hanging in there," a response that we all anticipated and loved. Although we may not hear "sharp" or "flat" when we pick up an instrument, we will rest easy knowing she will always be keeping tempo for us deep in our hearts.

Survivors include two daughters, Connie Schultz and her husband, Jim, of Fort Peck, and Laurinda Knudson and her husband, Oscar, of Billings; four grandchildren, Richie Sudduth of Saco, CJ Schultz and his wife, Katie, of Billings, Jalynn Graff and her husband, Tim, of Arden Hills, Minn., and Janae Miller of Billings; eight great-grandchildren, Tony, Matt and Kayla Sudduth, Emily, Hannah and Ella Schultz, and Soren and Kalle Graff; one great-great grandson, Alonzo Sudduth; many nieces and nephews; one sister-in-law, Glenna Knudson and a brother-in-law, George Knudson.

Visitation was held on May 4, from 5-7 p.m. at Bell Mortuary in Glasgow. Funeral services were held at 11 a.m. Friday, May 5, at the Methodist Church in Saco, followed by burial at the Grandview Cemetery in Saco.