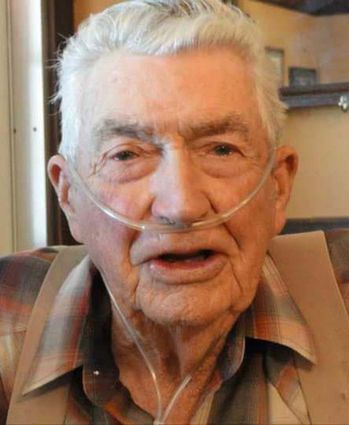 Courtney Carlson, 90, of the Baylor, Mont. community, passed away Tuesday, April 25, 2017, at the Frances Mahon Deaconess Hospital in Glasgow, Mont.

A memorial service will be held Monday, July 3, 2017, at 10 a.m., in the Bell Mortuary Chapel in Glasgow, with internment to follow in the Highland Cemetery at Glasgow.

He was born to parents Arthur and Amy (Watkins) Carlson on Sept. 2, 1926, in the family home in the Baylor community. He attended school in Baylor and Opheim as a member of the graduating class of 1945.

He married Harriet Ann Edwards of Opheim, Mont., on Nov. 22, 1947. They settled on the Carlson family farm, where he and Harriet raised four children and actively farmed until they retired in 1989. He continued to live on his farm until his passing.

He was preceded in death by his wife, Harriet; a brother, Cecil; and his father and mother, Art and Amy Carlson.

The family requests that donations be directed to the Opheim Ambulance Service.