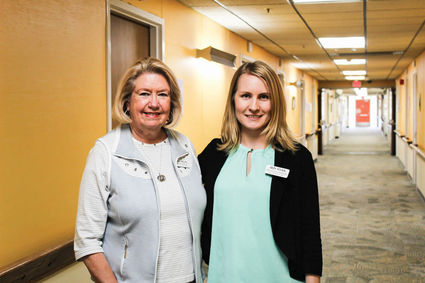 Last month, Glasgow's Valley View Home brought in Judy Melin of Livingston to act as interim director until Amy Ryan, the current director of operations, can obtain her license as a health administrator. Melin has worked for years as a longterm care provider as both a registered nurse and as a health administrator. Ryan alluded to Melin's expertise during a recent conversation with the Courier: "This is her fourth time being called out of retirement to help a facility." Melin, for her part, was humble, but also optimistic about VVH's future under the current climate of increased transparency and general reassessment.

Melin's month on the job with Ryan has been busy as the duo reviews policies, establishes employee standards, looks for establishing a training pipeline for certified nursing assistants, and works to reduce traveling nursing costs by recruiting and attracting local talent. "We are actually, in the month since we started, reducing the cost of traveling nurses and CNAs," said Melin adding that they are developing a pool of local nurses by offering shifts to those who have jobs elsewhere, but could use additional shifts or income. They have also sought to recruit nurses who had left under prior management, commenting that there are promising prospects in the works. "I would prefer to offer overtime to a local nurse than pay a premium and living expenses to a traveling nurse," said Melin emphasizing the need to reduce those costs.

The new administration is also hoping to solve the facilities CNA training problem by partnering with Hi-Line Retirement Center and Frances Mahon Deaconess Hospital to facilitate training supervision, clinical hours and classes at those facilities and then hiring those CNAs on at VVH. VVH is currently unable to train CNAs due to the immediate jeopardy discrepancies on their 2016 Department of Health and Human Services Inspection. The hope by partnering with other facilities is to overcome the need to hire traveling CNAs or to pay premiums to recruit CNAs to Glasgow.

In a further effort to improve the home, Ryan and Melin talked at length about employee welfare, training and accountability, which was a reported concern under HMS's leadership. Ryan compared the current situation to months past by saying, "People are saying they enjoy coming to work." Ryan touted an open door policy as Director of Operations and said, "I feel we're very good at empowering people and getting them the right training for the job." She said that going forward they wanted to attract high quality employees who wanted to work in long-term care, and would improve employee moral through coaching, mentoring and training. Melin and Ryan described efforts to review the policies and procedures for VVH employees. The intent is to train everyone to the standard and then hold people accountable accordingly. "If we need corrective action it needs to be fair," said Melin who also stressed the care and safety of residents as the primary goal of the staff at VVH.

Melin was eager to go on record saying that VVH is in substantial compliance with DPHHS standards and inspection results, and they were confidently expecting their yearly inspection for 2017 at any time. She added that the roof was the last main concern stemming from last year's review, and that a plan of corrections has been submitted and contractor bids were being sought presently. Neither Melin or Ryan could comment on costs as bids were still being reviewed, but they implied it would be a significant investment to the home.

Other key developments in VVH's future were the implementation of private rooms for residents, the recruitment of full-time nurses, and the reinstatement of resident admissions. "We are admitting," stressed Melin adding that she knew from hearsay that it was a concern in the past. The administrators were also looking forward to the launch of the home's new website commenting it would make applying for jobs automated and easy as well as promoting the home to future residents.