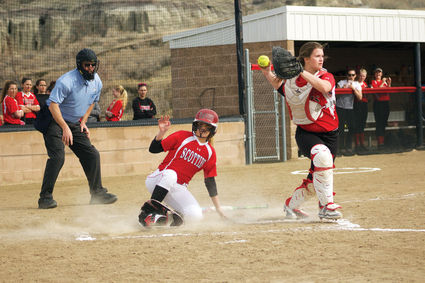 Senior Lexi Nixdorf beats the throw at home plate during the Scottie's away game vs. Glendive on April 6.

The Scotties won two consecutive games last week to start off their 2017 season. The team first traveled to Glendive April 6 to take on the Lady Red Devils, and came home with the 11-2 win.

The Scotties had 11 runs off 16 hits and only allowed 8 hits for Glendive.

For their second game, the Lady Scotties took on the Lady Golden Eagles of Lewistown at home on April 7. Although Lewistown had some good plays, they were unable to defend against Glasgow's all-around performance and the Scotties claimed another win, 11-5.

The Lady Scotties will be in Lewistown Thursday, April 13 and Friday, April 14, for several games. The JV squad will start things off Thursday morning at 10 a.m. when they face Belgrade. The Varsity girls begin their four-game stretch at 12:15 p.m. when they take on Conrad.