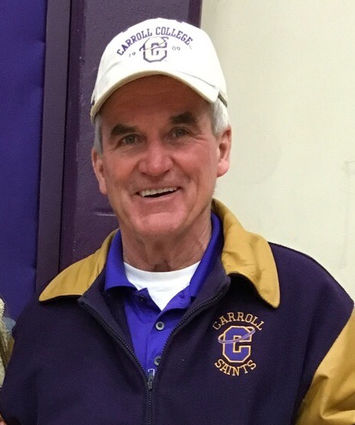 He was born July 2, 1945, in Glasgow, Mont., the second of five children to Gene and Elaine Etchart - a well-known and respected, second generation, Northeastern Montana Basque sheep and cattle ranching family.

He graduated from Glasgow High School in 1963 and went on to attend Carroll College, playing football, basketball and baseball for the Fighting Saints. His treasured time as a student and athlete at Carroll inspired a life-long love for the college and the Helena community. He graduated from Carroll in 1967 and enlisted in the United States Marine Corps. After completing Marine Corps officer candidate school, he was commissioned a second lieutenant. Upon his promotion to the rank of first lieutenant, he was assigned to a rifle company which he commanded during a combat tour in Vietnam.

After returning from Vietnam, he was accepted into law school at the University of San Francisco, where he studied for two years before realizing his heart was not in a law career. It was during that time that he met Sarah Fortune Russell from Bronxville, N.Y., on a blind date. The pair fell in love and were married on Oct. 18, 1975, in the Borromeo Chapel at Carroll College. He and Sarah then moved to Montana where he received a masters degree at Eastern Montana College.

Living in Billings, he served as the inland states coordinator for the Northern Tier Pipeline, which began his long career in public policy and governmental affairs consulting. He served as an under-secretary of the Department of Interior under President Reagan, before becoming a vice president of Burlington Northern Railroad.

In April 1984, he and Sarah welcomed their only daughter, Jeannie, who was, from the very beginning, the light of John's life.

He was well known for his extensive experience in legislative and communications work throughout the Northwest and in Congress. Throughout his professional career, he assumed a number of leadership positions. He served multiple terms as chairman of the Northwest Power Planning Council, Executive Vice President of Tonbridge Power and as a partner at the Gallatin Group Public Affairs. He also served on a number of boards including the Smithsonian National Air and Space Museum, St. Peter's Hospital, the Helena Forest Foundation, Montana Chamber of Commerce, and was a long-time trustee at his beloved Carroll College.

He was a natural leader known for his quick wit and incomparable memory. He loved athletic competition - especially those contests involving the Carroll College Fighting Saints and Notre Dame Fighting Irish - and had an extraordinary array of other interests including politics, history and golf. Above all other pursuits or interests, however, was John's love and devotion to his countless friends and his precious family. He was a man of great faith and long-time member of the Helena Cathedral.

A life well lived is a life surrounded by family and friends, and there is no truer example of such a life than that of John Etchart. He touched the hearts of everyone he met and will leave that lasting legacy to the many who were blessed to know him.

Survivors include his wife of 41 years, Sarah; one daughter, Jeannie; his parents, Gene (age 100) and Elaine (age 95); four siblings, Michele (Steve) Page, Joe (Patt) Etchart, Janeen (Tom) McCarvel, and Jacque Frederickson; his many cousins, nieces, nephews, and grand-nieces and grand-nephews who "Uncle Cookie" loved so much.

Please join us in celebrating John's exceptional life. A vigil service was held at the Carroll College PE Center on Monday, April 10, at 7 p.m., with family receiving friends at 6 p.m. Funeral Mass was celebrated Tuesday, April 11, at 12 p.m., at the Cathedral of St. Helena, followed by burial with full military honors at the Montana State Veterans Cemetery at Fort Harrison.

A reception took place from 2-4 p.m. at Green Meadow Country Club. In lieu of flowers, memorials may be sent to the John Newton Etchart Project at Carroll College, 1601 North Benton Avenue, Helena, MT 59625. Please visit http://www.aswfuneralhome.com to offer a condolence to the family or to share a memory of John.