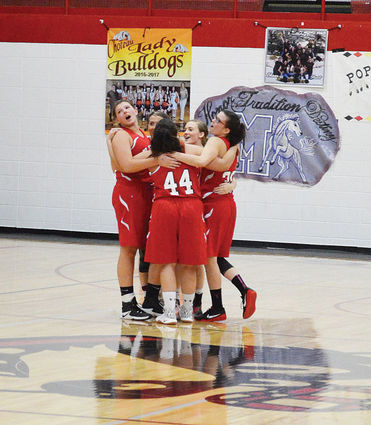 The Lady Scottie's five starting seniors during a break in the game at the Northern B Divisional Tournament held Feb. 23-25.

Of the eight teams competing in the Northern B Divisional Girls Basketball Tournament, the Lady Scotties had as much of a chance as any to advance to the state tournament in Billings.

This year, three teams from the division had the opportunity to punch their ticket to the big show scheduled for March 9-11.

Glasgow was unable to achieve even one victory during the tournament, however, as they fell to the 1B Choteau Bulldogs and the Shelby Coyotes.

The Scotties first faced the Bulldogs in game four of the tournament on Thursday night, Feb. 23. Scotties gave the Bulldogs plenty of opportunities to score at the charity stripe, and they took advantage, recording 22 of their total 56 points at the line. Choteau also dominated with their three-point shots, scoring 18 long-range shots. In comparison, the Scotties scored just six points from deep, both from senior Jordan Kulczyk.

The Scotties did their work under the basket, with the majority of their points scored in the paint. Khloe Krumwiede led the team in scoring, with 15 points followed by Leinie Hughes with 13 and Kulczyk with 10.

Defensively, the Scotties dominated in rebounds, grabbing nearly 61 percent off the boards, while Choteau only managed to secure just over 40 percent.

Krumwiede earned a double-double with her 10 rebounds, Hughes grabbed eight off the boards and Ziggy Chamberlain finished the game with four total rebounds.

Kulczyk led the team in steals, assists and turnovers, recording five each. Lexi Nixdorf finished with three steals, which likely contributed to her five personal fouls, followed by Tyra Johnson with two. Johnson also had the only blocked shot of the contest for the Scotties. In addition to her double-double, Krumwiede recorded three assists and four turnovers in the game.

The loss to the Bulldogs sent the girls to face Shelby in a loser-out game Friday afternoon.

Glasgow entered the contest against Shelby with guarded confidence. With their shot at a spot in the state tournament diminishing, a win against the Coyotes was their last chance.

The Coyotes grabbed the lead with the first bucket of the game and never faltered, earning the 58-48 win over the Scotties.

Kulczyk led the team in steals (4) and assists (3), but cut her game short when she earned her fifth foul in the fourth quarter.

Demi Aune and Chamberlain also worked themselves to the bench with five fouls each.

Offensively, while Glasgow worked in the paint again, Shelby dropped 27 points from downtown, and scored 19 points from the free throw line.

Leading the Scotties in scoring were Krumwiede with 14 and Hughes with 12.