19U Finish Third in State - Next Stop: NoDak 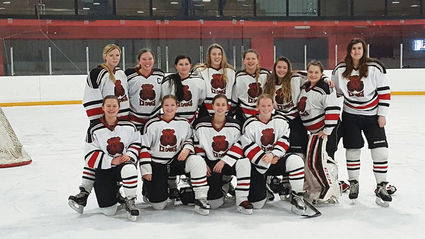 The girls advanced to the consolation game on Sunday of the tournament and brought home third-place with an 8-4 win over the Flathead Lady Fusion.

Flathead's Greta Roberts opened the game with a goal to secure an early lead, followed by another from Elizabeth Klemann with assists by Rozsa Csaplar and Roberts.

Glasgow's Kennedy Schmidt scored late in the first period with an assist by Bailee Holstein. Starting the second period, Flathead was on top 2-1, but quickly lost their lead when Glasgow scored three unanswered goals-the first by Zoey Crater from a Madison Knodel assist, and Knodel scored a pair from passes both by Schmidt.

The Lady Fusion's Morgan Baker tied the game 3:07 into the third period with assists from Maria Makman and Sidney Zimmerman.

The Ice Dawgs then took off with goals by Schmidt/Holstein, Teagan Fossum, Fossum, and a final empty net goal by Schmidt from a Fossum assist.

With the 8-4 victory, Glasgow earned third place in the 19U MAHA Girls Treasure State League. Flathead was assessed three penalties and Glasgow saw four players in the box.

The team will travel to Watford City for their second chance at a championship when they play in the North Dakota Amateur Hockey Association's 19U State Tournament Mar. 3-5.