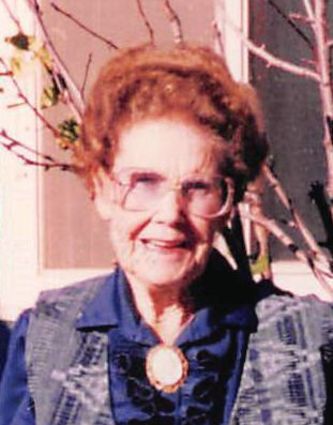 She was born July 2, 1918 in Glasgow, to Stuart and Quaint Brookie. She lived on her father's homestead north of the Bjornberg Bridge. She was home schooled until the sixth grade and then attended the Stuff County School with the Stuff, Canen and other neighboring families. She later attended and graduated from high school at Hinsdale in 1936.

She stayed at the Chester Hotel, which was a dormitory for school kids. Her mother (Quaint) was guardian there for two years.

After graduation, she attended college at Bozeman, majoring in home economics, graduating in 1940. She later taught science and English in Valier, where she met G. W. (Bill) Bowman, her future husband. After returning from military duty, she and Bill were married on May 13, 1945, at Opportunity, Wash.

The couple returned to the Saco area and took over the duties of working the family farm and ranch. Two children were added to the union, Georgia in 1947 and Jim in 1951. They also accepted Ben Ferguson as a foster child into the family.

She was a good cook, but would rather be outside. She loved taking care of animals or driving the tractor. She cared for the chickens, raised many pigs and would work diligently to revive a cold calf or sick animal. She enjoyed her flower gardens. She was probably happiest when in her tractor, cultivating or seeding crops. Lots of huge boulders were no match for her 145 or 835 Versatile.

With a family to feed, she spent much time cooking. It didn't take her long to whip up a meal for anyone who showed up at the table. She enjoyed hosting family and friends and helped organize family reunions. She was active in the Methodist Church and community, she loved music and played piano and organ for church and many funerals, helped with the Summer Bible School, 4-H and she was a FFA supporter, Theta Roe leader, and a Rebecca and Eastern Star member. She enjoyed many arts and crafts, but a favorite was wheat weaving.

She lived at the ranch until health problems arose. She called Nemont Manor, Prairie Ridge and Valley View all home and her family would like to thank all these people for the "helping hands" and kindness they showed.

She was preceded in death by her parents, Stuart and Quaint "Dolly" Brookie; her husband, G.W. "Bill" Bowman; a foster son, Ben Ferguson; and a granddaughter, Susan Ferguson Griffis.

A visitation was held Tuesday, Feb. 28, with family receiving friends and family from 6-8 p.m. at the Bell Mortuary in Glasgow. Services were held Wednesday, March 1, at 1 p.m. at the United Methodist Church in Saco, followed by burial at the Grandview Cemetery in Saco, Mont.