Will Face Choteau to Open Tournament 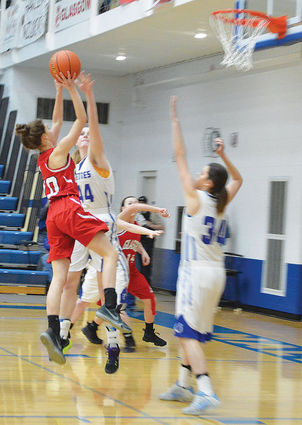 Anika Peters, GHS freshman, goes for a layup during the Lady Scotties' game against the M-Ettes in the district tournament Feb. 17.

The Lady Scotties competed at the District 2B Basketball Tournament in Malta Feb. 16-18, playing three games in three days, and punched their ticket to the Northern 2B Divisional Tournament.

Their first task of the tournament was to defeat the Harlem Lady Cats in a play-in game on Thursday night. Although they had won over the Lady Cats twice in the regular season, the Scotties still had to work for the 51-40 win.

The Lady Cats were most effective with their three-point shots, as the Scotties struggled to defend against the long-range shooters.

Leading the scoring for the Scotties were Jordan Kulczyk with 19 points and Leinie Hughes with 15. Defensively, Hughes matched her points with 15 rebounds for a double-double, and Tyra Johnson hit double digits off the boards with 11 grabs. The girls were 15 of 26 at the free throw line for 58 percent.

The win against Harlem advanced the Scotties in the tournament and matched them up against the Malta M-Ettes in game three.

The M-Ettes were well-rested and boasted the home-court advantage for the match-up. Once again, it was Sophia Stiles and Jada Nicholson leading the way for Malta, with a surprising effort from Eva Harms as well. All three hit double digits in the contest and led their team to a 55-36 win over the Lady Scotties.

The girls also came together defensively, with Hughes, Johnson and Krumwiede grabbing 23 of the team's 26 total rebounds.

The loss to Malta sent the Lady Scotties into the consolation game against Wolf Point on Saturday.

In regular-season match-ups the Wolves and the Scotties were split, with Glasgow claiming the most recent 52-49 win against Wolf Point on Feb. 10.

The Lady Wolves were confident, however, and out-scored the Scotties 18-10 in the first quarter. Things slowed down a bit in the second quarter, with both teams scoring just five points. At the half, the Wolves led the game 23-15.

In what seems to be typical for the Scottie girls, their second-half showing was much better than the first as they out-scored Wolf Point 32-19 to claim the 47-42 win. Hughes was the only Lady Scottie to reach double-digits in scoring with 12 points. Krumwiede and Kulczyk contributed 9 and 8 points, respectively.

Demi Aune, who works hard every time she hits the court, worked herself right to the bench with five fouls in the third quarter.

The Lady Scotties will play their first game of the divisional tournament Thursday night, Feb. 23 against the number-four ranked Choteau Lady Bulldogs. Game time is scheduled for 8 p.m.