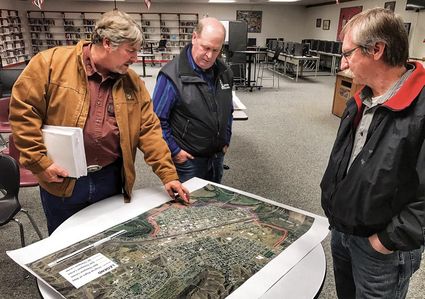 Sean R. Heavey/ For The Courier

The City of Glasgow, State and County Department of Emergency Services and members of the public met to discuss the recent Feasibility and Suitability Management study for the Glasgow Levee on Feb 15. The study issued a number of options for moving forward with bringing into compliance Levee encroachments in the area, so as to remain on the Army Corps of Engineers Levee program, according to City Manager Rob Kompel.

Currently, there are as many as 54 buildings encroaching on the Levee and countless utilities. This means that the structures sit within 15 feet of the Levee's center line. The Corps requires the 15 foot clearance in the event of emergency services fighting flooding with machinery and manpower.

The management plan was spawned by the Levee committee to negotiate the levees position in the Corps of Engineers System Wide Improvements Framework (SWIF) program. According to Kompel, "If dropped from the program, the city would bear the cost of flooding and the southside of Glasgow would be deemed in the floodplain by FEMA (Federal Emergency Management Agency), meaning all of the property owners would have to buy flood insurance if they are financing." The management plan study estimated that the total cost to the property owners in Glasgow would be $990,000 to just over $2.1 million annually making this a reoccurring expense and being a drastic economic issue according to Kompel.

The plan therefore recommended a number of remedies that would keep the Levee on the Corps program, and would cost significantly less to Glasgow. Kompel believes the most likely outcome is to move the Levee's centerline out into the floodplain, extending the encroachments beyond the 15 feet requirement. This coupled with buying property and removing structures near the Levee seems to be the most feasible option from Kompel's perspective. The cost estimates for the plans to remedy the encroachments are estimated to cost between $3.5 million to $8 million, but as Kompel pointed out this would be a one time cost not an annual cost to the city's residents.

The meeting sought to elicit public opinion moving forward with the process. Kompel estimated 15 to 20 residents attended amongst other professionals and government officials. "Most were supportive with moving forward with the plan," said Kompel although he acknowledged some in the past have been opposed to the necessity of the Corps program and federal regulations. The full study and plans can be found on the city website at http://www.cityofglasgow.com or by stopping by the city office.