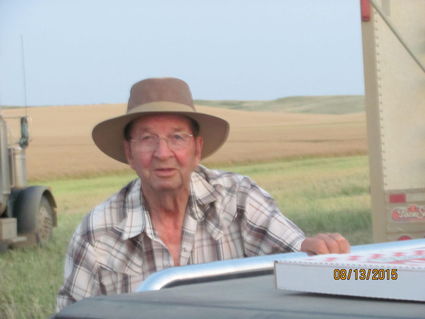 Services will be held at 2 p.m. on Thursday, Feb. 16, at the Scobey Lutheran Church, with Pastor Paul Landeraaen officiating.

He was born Sept., 26, 1929, in the Ossette Community to Nettie Ossette Sterner Miner and Fay Wade Miner. He was the youngest of five children. His parents homesteaded in 1914, and established the first post office in the area, naming the Ossette community. He started school at the one-room Success School through grade 6, was homeschooled by his mother for two years, and then attended high school in Scobey. Upon his father's illness in 1945, he returned to take over the farm.

On June 22, 1952, he married Helga Antonie Mikat at Our Saviors Lutheran Church in Larslan. They made their home in the Ossette community. To this union were born four children, Mona, Edwin, Steven and Marilyn.

They loved entertaining family and friends throughout the years and enjoyed 42 blessed years of marriage before Helga's passing in 1994. He continued to farm until 2012, when he moved to Scobey. After this, he continued to stay active in the farm, helping move machinery and delivering parts whenever asked. Harvest time was his favorite time of year and even rode some rounds in the combine this last fall.

Memorials may be made to the Daniels Memorial Hospital Foundation.