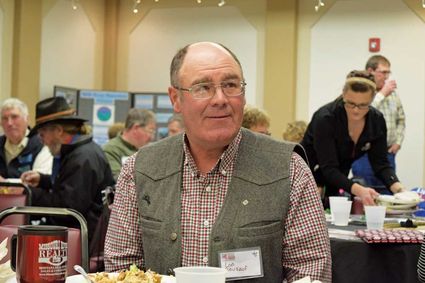 Lon Reukauf received an Environmental Stewardship award at this year's winter grazing seminar at the Cottonwood on Jan. 18.

Dr. Angus McIntosh, executive director of the National Range Allotment Owners Association, headlined this year's winter grazing seminar at Glasgow's Cottonwood Inn on Jan. 18. The event, hosted by the Valley County Conservation District, was well-attended, with farmers, ranchers and interested area residents from McCone, Phillips, Roosevelt and Valley counties, as well as elsewhere in the region.

On Wednesday, McIntosh discussed the history and ramifications of American judicial precedent as it relates to grazing and homesteading rights. The speaker underscored the Lockean principals behind real property and real estate rights in the West, and gave his advice for the protection of personal property and land rights; going on to indicate his personal reflections on the import of the incoming administration to the interests of regional agricultural producers.

According to DNRC Rangeland Resources Program Coordinator Stacey Barta, the event included "in-depth discussions of topics such as winter feeding and forage management, mineral supplements, and stock management before and after calving." She went on to describe the seminar as, "A great opportunity to meet with other producers and hear from the specialists in a relaxed setting."

The Stoneberg/Holt family was well-represented, with Horse Ranch, located in south Phillips County, taking away an award marking the family's contribution to range management and leadership.

Sierra D. Stoneberg Holt, PhD., delivered her paper, Reinterpreting the 1882 Bison Population Collapse, to attendees on the opening day of the conference. The paper, which will be published in the Courier in installments over the next few months, reinterprets received academic and historical assertions about bison extinction on the northern plains, describing it as, "the desperate ecosystem fallout when intelligent human management is removed from the equation." Stoneberg originally delivered the paper by-invitation at the 6th National Conference on Grazing Lands in Dallas, Texas, in late 2015.