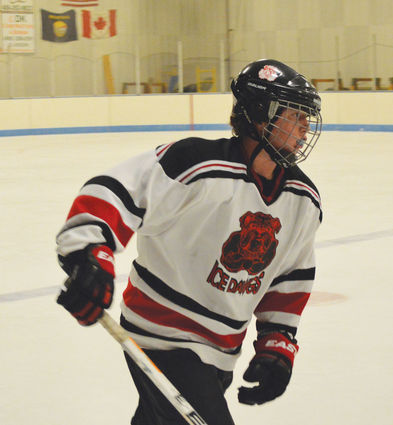 Bantam skater Bailey Hansen during a game at the Valley Event Center earlier this season.

The first of two games on the road for the Bantam Ice Dawgs, held Dec. 10, resulted in a 5-5 tie. Glasgow easily dominated offensively, out-shooting the Americans 52-15. Ike Braaten was the first to find the back of the net with a goal just minutes into the first period and the assist going to Michael Uphues. The Americans answered with two consecutive goals and the period finished with Great Falls on top 2-1.

The second period was relatively uneventful, with just one goal scored by Braaten, tying things up 2-2. The action picked up in the final period of the contest with both teams lighting up the scoreboard with three goals each. Braaten secured his hat trick with an assist by Kristian Price, while Price scored twice with assists going to Braaten and Koby Regalado. While the game entered into overtime, neither team was able to capitalize on the extra minutes and the game ended in the 5-5 tie.

The Ice Dawgs played a clean game, earning no penalties, and in the net Brayden Hansen earned 10 saves.

The second game for the Dawgs was the morning of Dec. 11. Glasgow again out-shot the Americans 47-22, and earned the win with a score of 7-4. Great Falls earned an early lead over the Ice Dawgs, scoring three times before Price found the back of the net with an assist from Trevor Johnson. The period came to an end with the Americans leading 3-1.

Although Braaten was able to come out and score an early goal in the second period with an assist from Price, Great Falls answered soon after with another point of their own. Before the period came to an end, however, Glasgow found their sweet spot and scored three consecutive goals: Braaten unassisted, and Price with two, both assisted by Braaten.

The scoring streak for Glasgow would continue into the third period with two more from Braaten, both unassisted. The Americans did pull their goalie late in the third in an effort to boost their offense, but all that did was open up the net for one of Braaten's goals.

Hansen denied 18 of 22 shots on goal, and the Dawgs earned the win with another penalty free game.

In another set of away games, the Bantams faced Butte Dec. 17 and 18, and finished with two wins for the weekend.

In the first of two weekend games, Glasgow dominated on the ice, winning over Butte 10-2. The Copper City Kings were able to score early in the game with two goals in the first period. The Ice Dawgs effectively shut them down after that, however, and Butte never scored again.

Leading the Ice Dawgs for scoring was Braaten, who finished with six goals and one assist. Also scoring were Kaden Kummerfeldt (1), Uphues (2) and Ian Peterson (1). Also earning assists were Aden Perkins, Nik Burke and Gage Siefert.

Bailey Hansen was charged with a two-minute infraction in the first period as the Ice Dawgs had too many men on the ice. Uphues also served two minutes when he was called for elbowing in the second period.

Brayden Hansen minded the net and earned 12 saves of 14 shots on goal by Butte.

Hansen was in the net again for the second game of the weekend and earned a shut-out against the Copper City Kings. Offensively, Uphues began the game with an unassisted goal just seconds into the contest, then earned an assist when Perkins hit the back of the net in the same period. Braaten scored twice unassisted in the second period, followed by an unassisted goal by Siefert.

Nik Burke finished the Dawgs' scoring streak with the final goal of the game in the third period, ending the game with Glasgow on top 6-0.

In the game, Burke earned a two-minute penalty for high-sticking, Perkins served a two and ten minute penalty for checking from behind and misconduct. In addition to his two goals, Braaten sat two minutes for roughing late in the game. To earn the shut-out, Hansen recorded 17 saves.

The Bantam Ice Dawgs will resume competition with games at the Valley Event Center on Saturday, Jan. 7 against Havre.