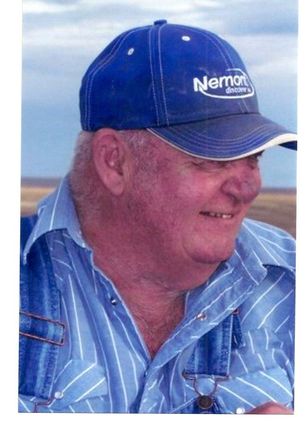 In his early years when he was not busy on the ranch, he enjoyed spending time with his family water skiing, fishing and barbecuing at the Milk River. He was an avid hunter and fisherman. He enjoyed bowling, playing softball and snowmobiling. He enjoyed the time he spent refereeing basketball and umping baseball. He was also a substitute teacher in the Ag Department at the Hinsdale School.

He was an honorary lifetime member of the FFA. He was also active in the Kyle Lodge #96 for many years. He served on the Nemont Telephone Board for 30-plus years. He spent many hours volunteering in the Hinsdale community. He was a member of the Milk River Cowboys Association as well as the Hinsdale Roping Club. He was very proud of his boys, Scott and Macy. During their high school years, he spent many hours on the road following Raider basketball and high school rodeo.

In 2000, he retired from the farming and ranching business. He then enjoyed carpentry and following his grandkids. One of his biggest highlights was when his sister, Debbie, came to visit. Together they enjoyed traveling the state of Montana and catching up with friends and family near and far. He spent one winter in Virginia with Debbie. That winter was one of his fondest memories and he spoke of it often.

He was blessed with a true friend in David "Dodad" Hillman. In their younger years, they refereed, hunted and fished together. When their kids got old enough to play sports, they gave up their whistles and started cheering from the bleachers. Dodad was a loyal friend to the very end.

When his health started to fail, he really enjoyed getting on Facebook to follow and catch up with family and friends. One of his biggest highlights was when friends stopped by the ranch to have a cup or two of coffee and visit.

He is preceded in death by his parents and one sister, Margaret Carl.

Funeral services were held Wednesday, Nov. 30, at 1 p.m. in the Hinsdale Legion Hall.