By Lori Dailey
For the Courier

Scottie Volleyball Season Ends in a Blur with Fourth-Place Finish 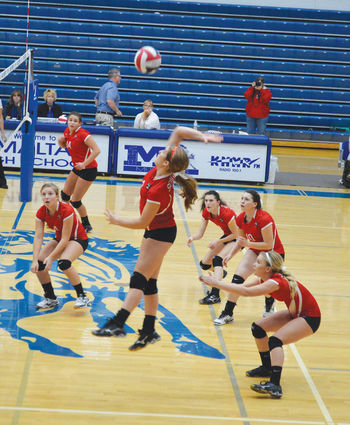 The Scottie cheerleaders kept the crowd going during the district tournament held in Malta Oct. 28 and 29. The squad also traveled to Shelby to support and cheer on the volleyball girls in the divisional tournament. Pictured l-r: Lauren Kolstad, McKenzie DeGreek, Nicole Lippert, Hayley Nybakken, McKenna Gagne, Des'Rea Dible, Ellie Page and Tayte Prewett. The Scottie mascot was Reno Jondahl and the squad was coached by Jessica Richter.

Coming off an exciting 12-game winning streak that earned them the title of District Champions, the GHS volleyball team trekked on over to Shelby for the Northern B Divisional Tournament Nov. 3-5. First up, was a match against Cutbank on Thursday afternoon and the Scotties continued to play efficiently, winning 25-17, 25-17, 26-24.

Several hours later, it was Glasgow vs. Fairfield. Even though the Eagles had a considerable size advantage, the Scotties played big and strong, coming up just short against a well-trained Fairfield team, 17-25, 20-25, 20-25.

Friday afternoon pitted Glasgow against Poplar, and the Scotties came out on top after a valiant effort by the Lady Indians in one of their best seasons ever, 25-17, 25-23, 25-16. 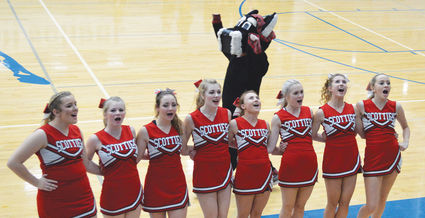 With solid support from their teammates, the three Scottie senior volleyballers led their team to a win at the district tournament in Malta Oct. 28 and 29. Pictured l-r: Teagan Fossum, Jesi Kennedy, Khloe Krumwiede, Baylie Chappell, Cordelia Nickels and Kiauna Barstad. The team come home from divisionals in Shelby with a fourth-place finish. Several of the girls were named as all-state and all-conference selections for the season.

The must-win match between Glasgow and Shelby was slated for Friday evening. A lot of emotion was at stake. The winner would qualify for State and the loser's season would end abruptly. Both teams had met twice before in preseason tournaments and had earned split results, but that was eight weeks ago. In three very close sets, both teams experienced momentum swings, celebrated great plays and rode the high tide as long as they could. In the end, it was a physically bigger Shelby team that came away with the victory: 23-25, 23-25, 23-25.

Details of individual matches blur after a while. What remains clear is that throughout the tournament the Scotties continued to deliver piercing serves, many of which resulted in aces; solid passing which opened up the door for great setting choices and aggressive attacks from all hitters, plus some spectacular defense in true Scottie style. The girls refused to die and played like champions the entire time. Seniors Kiauna Barstad, Khloe Krumwiede and Teagan Fossum led the way in mind, body and spirit, peaking at Divisionals and leaving it all on the court. Juniors Baylie Chappell, Bailee Holstein, Jesi Kennedy, Madison Knodel, Hannah Mickelson, Ashtyn Myrick and Kennedy Schmidt were amazing and will all be back next year, hungrier than ever to advance. Sophomore Cordelia Nickels and freshman Keely Fossum also did a great job contributing to the Scottie effort and will be instrumental in their upcoming seasons.

It's difficult to wrap up a season in an article. If you watched the girls play, you were treated to some of the best volleyball the northeast has to offer. If you missed us, there's always next year. We will be short three players we can never replace and who we will miss terribly, on and off the court, but we must move forward and create a new crop of irreplaceable players next year.

We coaches are immensely proud of all of our girls. Go Scotties!