By Dane Osen
For the Courier

Small Town Celebration a Feast for the Senses 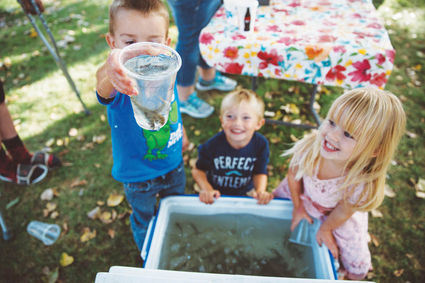 Landry Bowman (L) hoists a cup of minnows at the 2016 Fall Festival in Hinsdale. Landry is joined by Eli (center) and Jace Lacock.

Taking in the sounds and sights in Hinsdale at the Fall Festival on Oct. 2 was truly a delight. It was my first year attending the annual get-together, which is now in its fifth year.

With plenty of cotton candy and ice cream on hand, the children had plenty of energy, whether it was for a round of musical chairs or to try their skill at a catapult-style target game dubbed punkin' chunkin'.

There were also several local merchants displaying various goods as well. Sierra Holt and her husband Jason had their books on display. Other vendors carried everything from Montana-themed clothing and knives to tupperware.

After perusing the wares, I was drawn in by the aroma of chili simmering in crockpots. The Chili Cook Off drew a handful of competitors. For $5 you could sample each of the entrant's dishes and then place your vote for your favorite. At the conclusion of the event a new champion was named, and young Addison Idler took the bragging rights.

Being a musician, I was also drawn to listen to the several local performers in the center of the park. While most of the performances where generally Gospel and Christian music, which isn't necessarily my favorite genre, I still enjoyed their performances. My personal favorite was Krystal Bassett. The magnetic performer delivered a set of uplifting and captivating songs that just seemed to pour out of her, and I for one was thoroughly wowed.

If you missed the festival this year, be sure to come down to Hinsdale for the sixth installment next October.