By Alicia Erickson
For The Courier 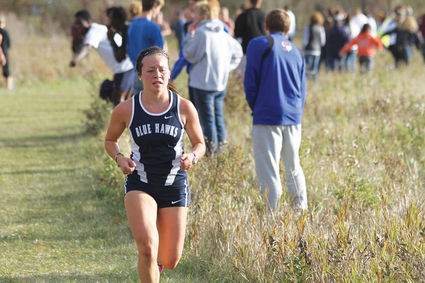 Finding strength from within is how Amanda Wolff gets through life. As a runner, she knows that it is her choice how long she runs as well as how hard she works out. She also knows that she is in control of her destiny.

Growing up in northeastern Montana, Wolff didn't have the easiest childhood. She came from a broken home. She lived with her mom until the fifth grade when she moved 50 miles away to be raised by her dad. By her sophomore year, she had moved out and was living with Steve and Christie Johnson, the school secretary/registrar. Life was tough, so she chose to run – literally.

Her high school track coach, Tim Phillips, became her mentor. He saw the potential that Wolff had and taught her how to use her emotions out on the field. According to Wolff, "He pushed me just the right amount. He knew I could do it."

Besides track, Wolff was also a part of the cross country and girls basketball teams at Glasgow High School. During her senior year, she received a recruiting call from Jace Schillinger, who was the interim track and field coach. He invited her to visit Dickinson State University. She liked that it wasn't too big or too small. For her, it was the right fit.

Wolff's journey at Dickinson State started in the fall of 2015 as a freshman. She quickly formed a bond with her teammates and Head Cross Country Coach Ben Shroyer. Wolff stated, "College wouldn't be the same if I didn't have my athletic family. As an athlete, you automatically know people. It has made the transition so much easier." That close connection paid off as both the men's and women's cross country teams won the North Star Athletic Association conference titles that season. "It makes me proud to be running in college, that we won the conference and became a part of history."

She is also a member of the women's track and field team competing for the Blue Hawks. She had an incredible freshman year with the outdoor track season peaking at just the right time. She won the 1,500 meter run at the North Star Athletic Association Outdoor Championships in May and was named an All-Conference athlete. "I'm very proud to be a Blue Hawk," said Wolff. "I'm proud to be a part of the Blue Hawk family. I want others to know how awesome it is and have them be a part of it too!"

According to coach Shroyer, "Amanda is a very important part of our team. She wasn't too sure she wanted to continue to run in college, as she had passion for basketball, but I am glad she chose to become a Blue Hawk distance runner. Amanda is very dedicated, hardworking, a team player, and desires to get better every day. She had a great start to her collegiate career, placing 11th overall at the conference cross country meet and winning the 1500 at the conference outdoor track & field championships. Amanda will be one of our underclassmen leaders this fall. She has been training consistently this summer and that will translate to a successful upcoming year. Amanda also had one of the highest GPA's on our team this past year and that means a lot to me as well. I am excited to see how high she can fly like a Blue Hawk throughout the next three years."

When Wolff is not running, she is busy studying. Majoring in exercise science with a minor in coaching, Wolff is learning all about her love of athletics and fitness by working during the school year for Dickinson Parks and Recreation, assisting with the intramural teams. Her motto in life is "Live Life. And Run."

She feels very fortunate to have people like the Johnson's, coach Phillips and his wife, as well as coach Shroyer and his family to look upon. They continue to provide the parental guidance she needs as well as the encouraging words to make her excel in the classroom as well as in a race. Wolff stated, "I'm blessed beyond belief to have such amazing people placed in my life to push me and be there for me throughout my journey in high school and now my journey in college."

As she begins her sophomore year, all eyes will be on Wolff as a leader for the Blue Hawk Women's Cross Country team this fall. For a girl that doesn't like to sit still, we know that Wolff will continue to set her dreams to new heights season after season. After all, she is running the distance.