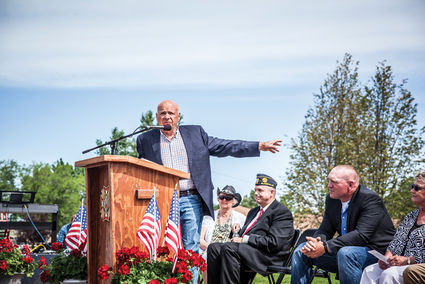 Carlos Valle / For the Courier

There was a heck of a turnout at the official opening ceremony for the Northeast Montana Veterans Memorial Park on July 4. Kelly Siefert from The Buzz, commented that it was the busiest event he'd seen at Fort Peck since the 1970s.

As attendees located parking and took their seats, Hailey Stone sang and played piano, followed by members of the GHS band, who performed "The Star Spangled Banner," (dressed to the nines in full regalia).

After an invocation from Mr. Jason Myers, Master of Ceremonies Don Fast introduced honored guests, including the artists, workers and contractors involved in the memorial's construction and dedication, and assembled veterans from in and around the area.

Next, Chuck Hayter held court as Distinguished Speaker. Hayter joined the Marine Corps out of Billings in 1999 and served for 15 years, including three deployments to Afghanistan and one to Iraq. He has also received a purple heart and continues to serve as an administrative lead at the Billings Veterans' Administration Clinic. Hayter spoke for 20-30 minutes, noting his admiration for the collective and individual efforts that went into the realization of the memorial.

Mr. Fast then discussed the history of the memorial's creation, nodding to Steve Page, Tom Markle, and other individuals whose efforts have proved indispensable.

Myers wrapped up the spoken remarks and Echoing Taps was performed by Glasgow's Leonard Swenson and Max Knodel; bridging, as they do, the many generational gaps that exist between the older members of the Veterans of Foreign Wars and GHS's most recent graduating class.

When I first arrived in this community last May, the memorial site in Fort Peck was just a lovely, grassy knoll populated by a few trees. Little more than a year later, the towering reminder of our local claim on national pride seems a fitting salute to the soldiers from all over this region who have answered the call.

Tiles are still being sold for the memorial Wall of Honor. For more information, call 228-2223, or visit veteransmt.org/contribute.html.