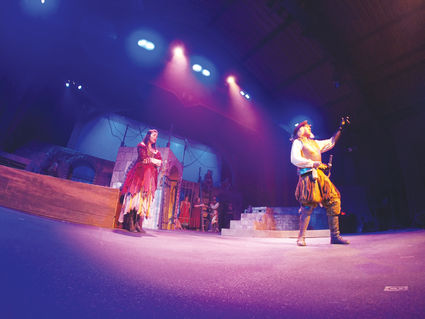 Local favorite Pam L. Veis delivers a muddled effort with her directorial debut for the Fort Peck Summer Theatre. And who minds a little muddle? Under the circumstances, probably no one.

Man of La Mancha is a well-known show, thankfully, and actor James Rio's Quixote hits most of the high notes needed to satisfy a friendly audience. That said, Veis' staging leaves key sections of the text needlessly confusing for those unfamiliar with this admirable work.

To put a fine point on it, the transitions from Rio's interpretation of Quixote to his take on the Cervantes character lack clarity and definition, with the two running together in problematic ways, rendering much of the activity in the show's final act borderline incomprehensible.

Lighting and sound challenges may have contributed to the difficulties some audience members reported in understanding the activity onstage, but careful blocking could have solved the problem, and either way, the responsibility rests with the woman in charge.

Quibbles aside, I enjoyed the performances on hand at FPST's latest and would challenge any first-time director to accomplish as much as Veis has here. It's not easy, folks.

Excellent turns by the principal cast (and locals Lily Helland and Tayte Prewett) went over well with Sunday's audience. Hannah Bentley plays the fallen woman a bit too cynically perhaps, but when she settles into her first big number (What Does He Want of Me?), all is redeemed.

Jay Michael Roberts' Padre is a pleasure, if uneven, and Marc de la Concha's Sancho is both accessible and charming. One wishes the latter were due for another appearance in this season's offerings.

Other positive notes include the bilingual audience reminders at the beginning of the show (a nice touch), and an convincingly atmospheric combination of costuming and set design from Kurt Alger and Mary Rooney respectively.

Musical Director Lizzie Hatfield again contributed in understated ways to the production (she led the small ensemble in The Last Five Years as well). She and her various local collaborators seem to be a real asset for the company.

At the end of the day, La Mancha is all about the legendary knight errant and his efforts to put his own dreams before competing visions of reality. This central theme is relayed clearly and well, with the effect that the production serves as a credible introduction (or reintroduction, as the case may be) to the famed Ingenious Gentleman.

The similarities between Quixote as he tilts at windmills and the general plight of the thespian charged with mounting a new production every few weeks are not lost on your reviewer. It can be a thankless task at times. But take heart, FPST, your audience (and your critic) believes.