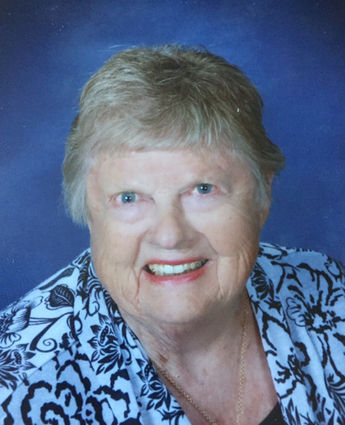 A Celebration of her life will be held Saturday, June 11, at 1 p.m., at Garden City Funeral Home and Crematorium, 1705 W. Broadway, in Missoula, with a reception to follow. Cards, letters and stories are welcome!

She had lived at The Springs Independent Living since March and was formerly of the Bigfork area, Great Falls, Glasgow, and Sun City, Ariz.

She was a loving mother and grandmother, and a proud veteran of the Navy WAVES during WWII. ("Women Accepted for Voluntary Emergency Service.")

She was born in Chisholm, Minn., in her grandparents' home on Jan. 4, 1925. She was full of stories about her youth in that area, the "Iron Range," once rich in iron ore mining, and growing up among so many ethnic groups – Scandinavians, "Slavs," Poles, Italians and Greeks. It may have nurtured her deep love of all people and her talent for getting to know them.

Her parents were Van and Jenny Stolpe. Her grandparents were Charley and Nancy Peterson. Charley's brother, Gus, married Nancy's sister, Hulda, so Nancy's cousins were "double cousins" and close companions through her life, as she was an only child.

She showed her talent for music at an early age. She said her life changed when she started piano lessons at age 13, played in the orchestra and the school song at all of the assemblies and asked to accompany soloists. In the WAVES, she was accepted to the "Singing Platoon" of talented women and recalled singing with Perry Como at a memorial service for President FDR at Rockefeller Center.

She attended Hibbing Junior College and the University of Minnesota, earning a bachelor of science in music education in 1949. Looking back, her life changed at a "boogie woogie" dance at the nearby town of Hibbing, Minn., when she met a handsome dark-haired young GI named Willard Holter. She and Bill were married Aug. 14, 1948. Before graduating from UM, she'd had baby number one, a daughter named Lynn, and Bill began his studies in the new field of radio broadcasting. His career would eventually bring him to Glasgow, where he and two others founded KLTZ and later KLAN radio. Bill was inducted into the Montana Broadcasters Hall of Fame in 2002 for his radio ownership across the state including stations in Great Falls, Missoula, Helena, Malta and Livingston.

Bill was a Marine 2nd Lt. and flight instructor and always had a passenger plane. Nancy was a willing "co-pilot," and the two traveled extensively across the world to Mexico, the Bahamas, Panama, Costa Rica and Cuba, not to mention flights across Montana and the USA.

A highlight of her married life was attending Alliance Francaise language school and moving to Paris. Bill was a broadcaster for CBS Paris Bureau and Blue Danube radio network in Austria. Once back in the states, the other children arrived: Todd, 1951, Jann, 1953, and Ross, 1959. Nancy said she was born with bright red hair like her dad's, but it became light golden blonde and was so throughout her life. She was also born with innate musical talent and had perfect pitch. Through life she was a choir director or accompanist at various churches and sang in the Great Falls Symphony Choir. She served on volunteer boards for United Way, Girl Scouts, YWCA and the symphony.

She was active in her P.E.O. group Chapter AX of Great Falls and Daughters of the Nile as Bill was active in the Shrine. She had a knack for writing special songs for friends and family, performing on the piano for the honoree. In her eighties, she went from songs to "toasts."

In 1972 the Holters moved to lakefront property on Flathead Lake and spent summers working the sprawling cherry orchard of 700 trees. In 1987, Bill was diagnosed with Parkinson's disease and they downsized to a smaller place near Yellow Bay with a gorgeous view. Bill passed away in 2005 due to complications of Parkinsons.

Nancy began snowbirding to Sun City during winter months. There she kept up with a Minnesota group of friends, the Red Hats, her ex-WAVES, P.E.O., and daily swimming. Her dearest group of "gals" were 12 friends since kindergarten who called themselves the "Dizzy Dozen" and who were able to have a Chisholm reunion in 2006. With Nancy's passing, they are now down to five.

Survivors include two daughters, Lynn Redpath and her husband, Mike, of Great Falls, and Jann Berntsen of Livingston; two sons, Ross Holter and his wife, Janet, of Kalispell, and Todd Holter of Los Angeles; Lynn's children, Krista Redpath Pyron and Van Redpath and his wife, Brooke, of Missoula; great-grandsons Evan and Oliver Pyron, and Finley Redpath of Missoula, and Carl Berntsen and Casey Berntsen of Livingston, Mack Holter and his wife, Rebekah, and Dillon Holter, of Kalispell. They were the loves of her life. She is also survived by the close friends who've shared her almost-daily phone calls and surrogate daughters and sons she has loved for years. You know who you are.

Condolences may be shared with the family by visiting gardencityfh.com.