By Georgie Kulczyk
For The Courier

Track Season Comes to an End for Scotties 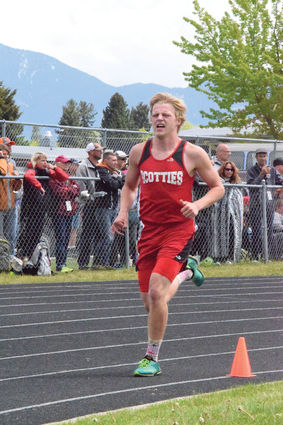 Senior Walker Allen competes at the state B track and field meet held in Bozeman this past weekend.

The atmosphere at the State B Track and Field Meet was remarkable. There were all the usual distractions and performances, but they were more pronounced.

The starter's gun seemed to crack a little louder - even more so when it popped off twice, signaling a false start.

The aroma of menthol was prevalent and athletic tape was in abundance.

The state meet also had more defined rules that were strictly enforced. Athletes were reminded several times that they would not be able to compete unless and until they had their spikes inspected for compliance.

Additionally, coaches were not allowed on the infield after 10 a.m. each day of the meet, so the athletes had to compete without the guidance they were accustomed to.

Despite not having the coaches readily available, the Scotties dug deep and did what they had to do.

Neither the boys or the girls brought home team hardware from the weekend, but the Scotties had some good individual wins and personal achievements.

For the boys, Benji Phillips left Bozeman with an individual gold medal for his 190' 7" javelin throw. Head coach Tim Phillips commented on his son's efforts: "We don't spend a lot of time dwelling on things, but it was pretty nerve-wracking on Friday morning, especially with slippery conditions again. Obviously, to win a state title, I'm very proud of him."

Luke Breigenzer reached the podium with fourth-place finishes in both the 110m hurdles (15.47), and the 300m hurdles (41.19). Both times were new personal bests for Breigenzer. "Luke really upped his game in the hurdles," said Phillips. "He came in at 16.14, dropped a quarter second in the preliminaries, and then another 32 hundredths in the final to run a 15.47. To get fourth in both the hurdle races behind some of the best athletes of any class in the state is pretty amazing."

Phillips had higher hopes for the boys than ninth-place. "I thought if everything went right, we could have scored in the mid-thirties for points," he said, "but seldom does everything go right."

"Ethan didn't have his best hurdle race," said Phillips, "but I really thought he brought everything he had for both the short and long relays."

Senior Walker Allen struggled all season with his legs seizing up on him. "We were hoping that would go away as we rested for state," said Phillips, "but it didn't."

Senior thrower Trevor Toavs was a contributor in more ways than one, according to Phillips. "He has really helped so many of our other throwers develop technique. We are really going to miss him."

In the discus, Toavs was just 5 feet from placing. " That was pretty tough," said Phillips. "He's worked so hard."

Despite some personal disappointments, Phillips indicated the vaulters did pretty well. "Chase (Hughes), Logan (Gunderson) and Kyle (Ross) all were one height away from a possible sixth place," he explained. "Cody (King) didn't have his best day, but it wasn't from lack of effort," he added. "You just run into those days once in awhile, and being as this is his first year in track, I thought he had a great season."

According to Phillips, the girls struggled all season with injuries and illness, and of course the level of competition at the state meet is another obstacle entirely. "We knew we had our work cut out for us," he said, adding that he thought the girls finished a little ahead of where a good day would have landed them.

"Karissa (Liebelt) has overcome so much over the past few years," explained Phillips. "In the long jump, she competed well, but the competition was so tough. I'm really proud of her making it to that level."

"Andrea (Hansen) didn't have her best day in the disc," said Phillips, "but she got in there and competed. She was so nervous just for district, to make it through to state was a big accomplishment for her."

Individually, Alex Simensen dominated for the Lady Scotties, placing in three individual events: sixth in the 100m dash, 13.10; fourth in the 200m dash, 27.11; and sixth in the 400m dash, 1:01. Although she didn't place in the pole vault, Simensen did achieve a personal best with a vault of 8'. "Alex set a personal best in the 400, and her time has her sixth in history for GHS," said Phillips. "I think her 200 time was her best without a tailwind. She didn't have a perfect start in the 100 but still placed there. To place in all three sprints is pretty tough."

Simensen also holds the third-place spot on the GHS record board with her best time of 12.95.

Baylie Chappell placed third in the 100m dash (and earned a fifth-place spot on the GHS record board) with a new personal best time of 13.00, and Julia Kolstad placed sixth in the 100m hurdles with a time of 16.52 (also a new personal best). "Baylie hit that 100m race like she was shot out of a cannon." exclaimed Phillips. "To place third as a sophomore is very, very good."

Phillips expressed his pride in Kolstad and her perseverance. "Julia Kolstad had a great half-season with us," he said. "She battled through mono and really made the most of her time when she got back. With all she's gone through, I was extremely proud of her placing the 100m hurdles."

Scottie thrower Leinie Hughes placed fifth in the shot put with a throw of 34-2.50. "Leinie's shot put was a fantastic achievement for her," said Phillips. "To place in that event is really tough," he added. "Three of the four ahead of her were seniors, and the other one is an all-world athlete, so she was in some pretty good company."

Phillips was happy with the results for the girls' relays, both finishing with new personal bests. "The 400m relay wasn't perfect, and we needed to be to place second," he explained. He added, however, "First place was a new class B record, so I think the girls feel pretty good about their run. They ended up third on the GHS record board too."

"The 1600m relay was pretty fun to watch," continued Phillips. "I thought we could go a little faster, but we looked a little tight during that one. Still, to get a medal and to run that fast is a good way to end the day."

In conclusion, Phillips said he was really proud of both the boys' and girls' teams. "Even though things don't turn out exactly how we want them to," said Phillips, "I know the work that was put into the season, and I applaud their effort."