And The Winners Are... 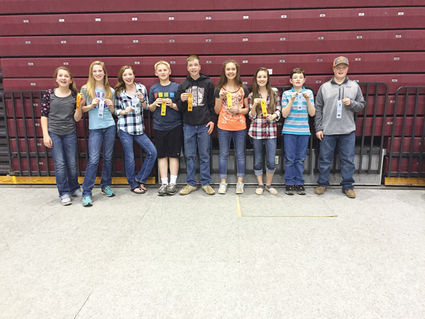 Connie Mogan / For The Courier

Hinsdale was well-represented at the State Science Fair in Missoula March 21 and 22. The sixth through eighth grade students that participated are pictured l-r: Montaya Idler, who scored a bronze for her project exploring tooth decay; Kaitlyn McColly and Danika Soper who both earned a silver for their study of the effects of different concentrations of bleach on killing bacteria; Trey Johnson whose project on energy drinks received a gold ribbon; Loden Idler, who received a bronze ribbon for his project comparing different nutrient sources for hydroponics; Halle Beil and Elise Strommen who each received gold ribbons on their project studying the effectiveness of soap vs hand sanitizers; RJ Burnham with his silver ribbon for his project on the blocking of wifi signals, and Aiden Albus showing the silver ribbon he earned for his project on organic matter in the soil.