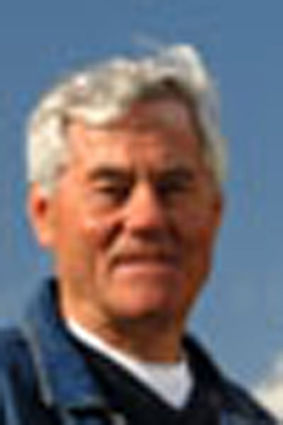 Devoted husband, father, grandfather, parts man and fisherman, Tony was a happy man who whistled through life. He passed away Monday, March 14, 2016, at the age of 82, after a very brief illness.

At his request, the family will have a private interment.

Born in Cohagen, Mont., in 1933, to Fred and Anna Dyba, he grew up in Miles City and attended Sacred Heart and Custer high schools. He was a born salesman. As a youngster he demonstrated an early gift, peddling newspapers and a friend's mother's needlework in the saloons of Miles City. He served in the U.S. Army, then started his career at Valley Motor Supply, first in Miles City and then in Glasgow. It was there that he met his wife of 58 years, Helen Caricaburu, and had three children.

In 1983, he and Helen moved to Billings and he retired a few years later. His retirement centered around helping his family and planning for Fish Camp, an annual August gathering with his fishing buddy brother, Jerome, and beloved nephews out in Oregon. He was a car guy and motorcyclist and took great delight in teaching his grandsons how to water ski, ride motorbikes and drive pickups. He valued God, family, country, cigars and a good single malt Scotch.

He was preceded in death by his wife, Helen, of Billings; children/grandchildren, Paula of Billings, Tony (Ruth, Evan, Greg) Dyba of Evergreen, Colo., Bridget Kornder and her husband, Dave, of Denver; two brothers, Fred Dyba and his wife, Katie, of Billings, and Jerome Dyba of Bozeman; two sisters, Rose Bianco of Boston, Marlene Speder of Biloxi, Miss .; and many nieces and nephews.

Condolences may be made online at http://www.michelottisawyers.com.

Michelotti-Sawyers Mortuary is assisting with arrangements.