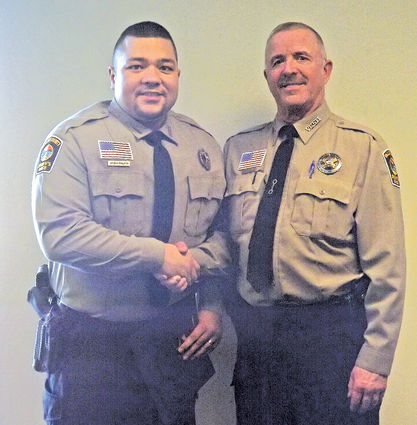 Courtesy of Joe Tihlarik / For the Courier

Joe Tihlarik was one of 53 new officers who graduated from the Montana Law Enforcement Academy in Helena on Dec. 11. He returns to the Valley County Sheriff's Department as a deputy.

Though the official position is new, Tihlarik's time with the Department is not. He started as a detention officer two years ago. He filled in as a deputy when the department was short-staffed, getting on-the-job training in Fort Peck. He then returned to his role in the jail before attending the academy.

Tihlarik says he's always had an interest in law enforcement. He and his family, a wife and three children, relocated here from Jacksonville, Fla. Asked about our community, he says, "I like it. I like it a lot." He intends to stay in Valley County for the long-term.

Sheriff Glen Meier noted with pride that Tihlarik's class had one of the highest academic ratings he could recall. Tihlarik plans to focus on the specialty areas of drug and sex crimes. Meier encourages deputies to choose an area of interest to them, saying, "It makes their job more interesting and it benefits the community more."

As the department welcomes their new deputy, they also announce there is an opening for another. Meier says they are taking applications to replace Reed Messman, who took a position with the state. "We wish him well with the Department of Criminal Investigation," said the Sheriff.