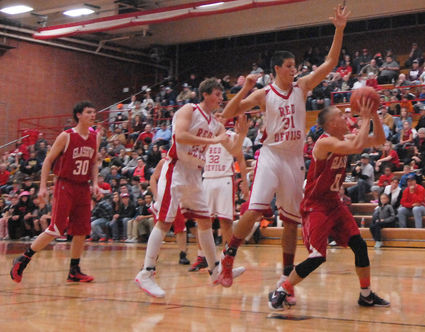 A slow first quarter let the games get away, and the Scottie boys find themselves 0-2 after the season debut on the road. The Scotties lost to Dawson County and Roundup with the same score in both games, 62-40.

Size was a clear advantage on both opponents' rosters, and the young Scotties were simply outmatched in height and experience. Trailing in every quarter, the boys nevertheless worked hard and head coach Norm Braaten was heartened. "Now we need to channel individual effort into a cohesive team output. We are making strides," said Braaten.

The hometown fans will meet the Scotties this Friday, Dec. 11, as they host the Baker Spartans in the first home game of the season. Baker, staffed with football kids from the fall, returns three starters and Braaten expects to see a physical game.

In spite of double digits effort from junior Trent Herbert, scoring came far and few in between for the Scotties as the Red Devils seniors Jarod Asche (6'9") and Bret Vester (6'7") dominated in the paint and off the glass at both ends of the floor.

The Scotties were limited to only 15 rebounds. Scottie seniors Zach Miller and Ethan Etchart each managed to score an offensive second chance when catching a break in the Red Devils' zone defense. On the perimeter, the Scotties were able to convert off of Glendive's turnovers, contributing to an 11-point fourth quarter.

The impenetrable paint forced the Scotties to settle for jump shots, a skill that Braaten said is fine-tuned from repetitive practice in the off-season. "Most of our kids don't play basketball in the summer because they are involved in other sports. And it shows when we play teams that play through the summer," said Braaten.

The Scotties were disciplined against the big posts, though, allowing the Red Devils only 10 shots from the free throw line.

Herbert led the Scotties' offense with 14 points, with even contribution from the rest of the team. Etchart added 8 points, Miller 6, Chase Hughes 6, Luke Breigenzer 4, Tyler Hersom 2, and Braden Ross 2.

This fast-paced game saw 14 turnovers and a nice free-throw percentage-9 for 10-by the Scotties. Miller led the team with 14 points and 10 rebounds, followed by Herbert's 11 point contribution. As a team, the Scotties shot 29 percent (14-48) from the field and grabbed 27 rebounds.

Roundup's sophomore Kelson Eiselein (6'4") and senior Abel Armitage (6'5") provided plenty power for the Panthers at both ends of the court, but their 3-point shooting was just as lethal.

"We slipped in our defense sometimes and forgot where we were supposed to be. That's how Roundup shot so many 3-pointers. We've got to implement the defense patterns that we do at practice," emphasized Braaten.

Junior 5'9" Tyler Hersom scored first for the Scotties, fouled then hitting both free throws as he went up against a 6'5" Armitage. Hersom later scored a trey himself to finish with a 5-point game.

Etchart added 6 points, and Hughes and Breigenzer each added 2. All varsity players saw minutes on the floor.