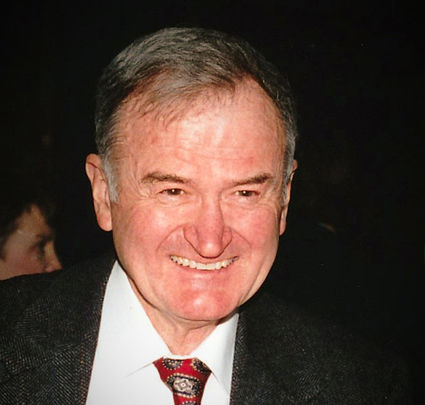 Leonard "Len" Etchart, 87, slipped peacefully into the arms of his Creator, on Monday, Oct. 5, 2015. Father, Brother, Husband, Uncle, Papa, Friend and "Doc" - he was beloved and will be missed by many.

He was born Jan. 21, 1928, to Catherine and John Etchart, near Tampico, Mont. He was the youngest of five children, following Ferne, Gene, Mitch and Mark. Working on the family ranch developed his strong work ethic and the ability to build and fix ANYTHING. That is also where he began his lifelong passion for learning, problem-solving and inventions. At age 23, he applied for and received a U.S. Patent for a hydraulic farm loader.

His brother, Gene, described him as a scholar. Len graduated from Glasgow High School at age 16. He graduated from Montana State College in 1950, with a B.S. in agricultural economics, and was elected president of his senior class. The veterinary classes at Montana State initially sparked his interest in medicine and brother Gene and sister-in-law Elaine convinced him that medicine was his future.

After serving his country in the U.S. Air Force in Korea, he traveled the world a bit on his way home, including a stop in the Basque country to meet his parents' relatives. Once home, he continued his studies at Georgetown University School of Medicine, where he was elected president of his graduating class. The first year of medical school, his mother accompanied him to Washington, D.C. The next summer, on July 28, 1956, he married Patricia Staunton, whom he met through his brother Mitch's future wife, Donna Lee. After graduation, he and Pat moved to Minneapolis, where he completed his internship at Minneapolis General Hospital, and was given the "Best Instructor Award" by the hospital interns.

In 1963, he and Pat moved to Billings, where he started his internal medicine practice, and they raised their three sons, Mark, John and Tom. When not practicing medicine, he loved to show the boys how to build and fix things. He always had a project. "Uncle Lenny" also always had room in his heart and his home for his beloved nieces and nephews, and later on became "Papa Len" to his adoring grandchildren.

He was dedicated to his patients and to furthering the medical field. In addition to his practice, he established the Cardiac Rehabilitation program at the Billings YMCA and was the medical director for the Rocky Mountain College Physician Assistant's program. He was president of the Montana Heart Association, a Fellow of the American College of Physicians, and he served on the Board of the American Heart Association.

He served his community tirelessly. In 1995, he received the Phillip N. Fortin Humanitarian Award presented by the YMCA. In 2004, he was a Rocky Mountain College Honorary Doctoral recipient.

He was known for his "one-on-one" approach to medicine, including a healthy dose of his quick wit and dry sense of humor. Recently, he was able to attend his Medical School reunion, with the assistance of niece and godson, Michele and Steve Page. The family is grateful for the outpouring of love for him, and for the calls, visits, errands and many kindnesses done for him prior to his passing.

He was preceded in death by his wife, Pat; his parents; his sister, Ferne Corderman, and her husband, Rex; one brother, Mark; one sister-in-law, Donna Lee; three nieces, Katherine Etchart, Nancy Etchart and Sally Jo Page Haynie; and one nephew, Jake Etchart.

Survivors include three sons, Mark and his wife, Lynn, of Helena, John and his wife, Jodee, of Billings, and Tom and his wife, Stacey, of Bozeman; six grandchildren, Catherine, John, Thomas, Joseph, Jacqueline and Graham; two brothers, Gene Etchart and his wife, Elaine, and Mitch Etchart of Glasgow; one sister-in-law, Delores (Mark) Etchart of Billings; many beloved nephews and nieces; and other dear and lifelong friends.

Memorial Mass was celebrated at 10 a.m. Friday, Oct. 16, at St. Thomas the Apostle Church in Billings. A vigil was held at 7 p.m. Thursday, Oct. 15, at Michelotti-Sawyers Mortuary, 1001 Alderson Ave. in Billings.

In lieu of flowers, please consider a gift to the Billings Family YMCA or to a charity of your choice. Michelotti-Sawyers of Billings was assisting with arrangements.