By D.K. Holm
For The Courier 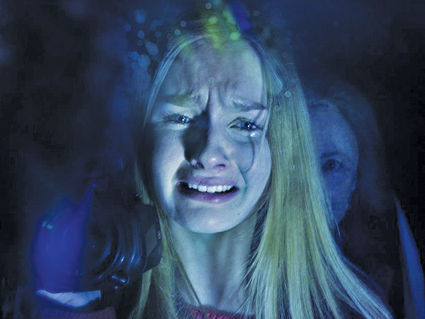 Olivia DeJonge confronts her nightmares in Shyamalan's latest attempt at recapturing the glory of The Sixth Sense.

Most horror films entail someone going somewhere hazardous where they are scared (The Fall of the House of Usher, The Haunting), or settled people visited by the unholy (Poltergeist, The Exorcist). The Visit blends the two things in a tale of two kids sent to spend a season with their grandparents. The oldest is Becca (Olivia DeJonge), a budding filmmaker who is chronicling the visit in the manner of other movies produced by the filmmakers of "found footage" films such as Paranormal Activity. The grandparents have weird habits. They demand that the kids stay inside their room at night lest they see the oldies odd nocturnal behavior. It's a puzzle movie, in which we are invited to guess the twist before the filmmakers bestow it upon us in a shock. As it happens, if you've seen the cheaply budgeted regional horror film Don't Go In the Basement, you know what's coming.

The story behind the film, however, is more interesting than the film itself, and concerns the career of its filmmaker M. Night Shyamalan. The Visit is the director's 12th film, most of which he has also written. His first two films were autobiographical junk (Praying With Anger, Wide Awake). The last five were overreaching bores (The Village, Lady in the Water – which inflicted Bryce Dallas Howard on an unsuspecting public, The Happening, The Last Airbender, a kids' film, and After Earth, a vanity project for the Will Smith family). The Visit is a return to low-budget roots, the kind of film Shyamalan made when he was a kid and which he sometimes includes on the DVDs of his better films. These comprise The Sixth Sense, which introduced the modern "twist" narrative, Unbreakable, made for comic book nerds, and Signs, an alien invasion story with Christian elements. Rarely have young directors soared so high only to crash so low. The Visit is a re-grouping, perhaps a "calling card" movie designed to show that the director can make an effective, efficient tale on a small budget. Whatever it is meant to be, The Visit is an effective fright fest, agreeably detached from the filmmaker's past excesses.