By Virgil Vaupel
For The Courier 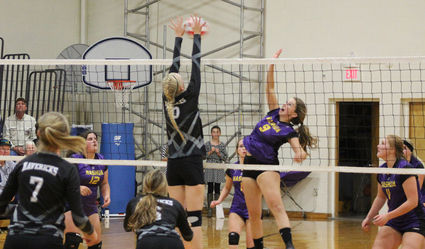 VIRGIL VAUPEL / for the courier Nashua Porcupine Sophia Koessl attempts a kill but Maverick Mickayla Johnson is right there for the block. Despite the efforts of the Lady Mavericks, the Nashua Porcupines won the match in three games: 25-14; 30-28; and 25-20. See stats page 2B.

The new North Country Lady Mavericks traveled to Nashua to test the mettle of the Lady Porcupines and came away with the knowledge that the Porkie's "Mettle" was too much for the Lady Mavs to handle.

Not that the Lady Mavs played poorly. I thought they played very well, indeed. After all folks, the second game didn't end until the score of 30 to 28 was achieved, favoring Nashua unfortunately for the Hinsdale/Saco/Whitewater fans.

Casity Boucher earned my star of the match honors because of her stellar play in the back row making unbelievable dig after unbelievable dig keeping the second match going. Some of her digs were shoetop level and she managed to make pretty fair passes to teammates. Good on ya' Casity.

One play went like this . . . give or take a bit maybe. The ball was hit over to the Lady Mavericks' Payton Chopper who hit it up, up ,up and into the rafters. The crowd groaned. The ball passed over the heating duct, hit another rafter and came down like a rocket. Usually that spells disaster for the player under the flight of the ball but this time Delaney Beil was there and played the carom just right, setting Mickayla Johnson who whacked the ball over the net where it landed harmlessly in amongst a Nashua player or two.

The Porkies were transfixed when the ball came back over to their side of the net after traversing among the stars, rafters and heating ducts, set perfectly ending with a KWA by Johnson. It's just not supposed to happen that way.

That second match was an absolute classic and it was what volleyball these days is all about. It's a great sport with lots of fast paced action.

I have to mention Caitlin McColly's super KWA in the junior high game. It was smashing!

That was Thursday. On Saturday we all hopped onto Honda Trail Nineties and raced to Opheim to play a match with the Lady Vikings of that town.

In a great gym that was built back when buffalo roamed and deer played with antelope the Lady Vikings didn't fare too well. Indeed, the crowd was very helpful but there was a time in the junior high match when one of the most diminutive (smaller would be the word in today's political correctness arena) in class C volleyball was having a deuce of a time getting the ball over the net when it was her time to serve. When the ball hit the net the crowd yelled supportive words like "you'll do it next time" or "nice try."

Well, this sweetheart of a young lady had had enough of the platitudes the next time it came her time to serve she missed again and the fans started their thing. The young miss shushed them with a finger to her lips. It was priceless! Good on ya' young lady.

Actually, the highlight of the evening for the Opheim fans was that the junior high girls won both matches.

It didn't go so well for the seven varsity players as the Lady Mavs rolled over the Lady Viks 25-12, 25-13 and 25-7. Don't be discouraged, Opheim. Your girls showed some talent and will progress with each match.

And that's pretty much how I spent my weekend. Watching volleyball. You might think of attending a match in a drive-in near you. You won't be bored.

That's it for now folks. Thanks for listening.