Sage Grouse Not in Need of Listing, Feds Say 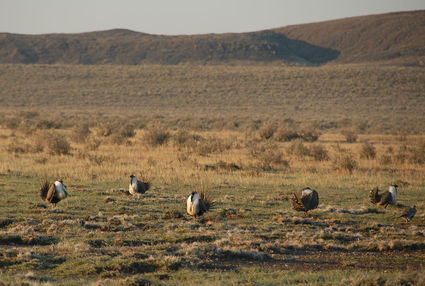 Andrew McKean / For The Courier

South Valley County has several leks-a sage grouse dancing ground where males strutt with puffed-up chest and fanned starburst tail to attract females in the spring. The U.S. FWS has determined that the bird does not warrant listing as an endangered species.

U.S. Secretary of the Interior Sally Jewell announced on Tuesday, Sept. 22, that the U.S. Fish and Wildlife Service has determined that the greater sage grouse does not warrant protection under the Endangered Species Act.

Lauded by many groups as an example of unprecedented collaboration among businesses, scientists, ranchers, government land agencies and environmental groups to conserve sagebrush habitat, this decision came after years of uncertainty that has worried ranchers and mining industry in the American west who believe that listing the bird under ESA could jeopardize their economy.

"This has been the largest conservation effort in the U.S.--if not in the world. We've proved that the old way of doing things may not be sustainable. To say that it takes a village is an understatement," said Secretary Jewell, referring to historical conservation effort across 11 western states over 170 million acres.

Prevention of the loss of sagebrush ecosystem, science, rangeland fire suppression, and restoration of native species are the key components to sage grouse conservation, according to Secretary Jewell. Keeping oil and gas development out of sage grouse breeding ground is also essential.

Dan Ashe, Director of U.S. Fish & Wildlife Service, says that while the loss of sage grouse population is still expected, the rate of decline has lessened across the range compared to the historical rate. The decision to not list the greater sage grouse as an endangered species was a unanimous recommendation from his staff. Ashe adds that 80 percent of the sage grouse population is not at risk from agriculture conversion.

Marc Kloker, information and education program manager at the Montana Fish, Wildlife and Parks Region 6 office, says that while he is uncertain how this announcement will impact hunting, the department will continue to follow the sage grouse initiative plan and monitor the population in the region.