By Mary Fahlgren
For The Courier

Wheatgrass Gallery: Artist of the Month 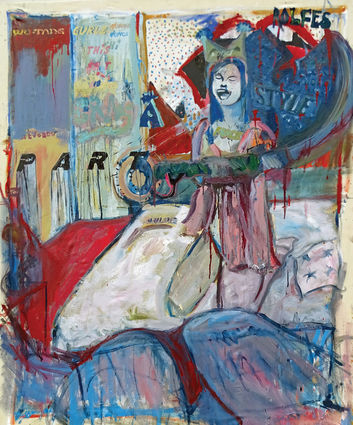 Pictured: 'Wutang Style,' by artist Paul Rolfes. Rolfes' work will be hanging at Wheatgrass for the month of October.

He came into the gallery in the morning in a small crowd of regular customers. I thought they were together, or maybe he needed to pick up his laundry, but when I asked if he was a friend of theirs, she said she'd never met him. I looked closer and saw his hands were muddled with oil paint that matched the specks on his jeans. Rather bluntly, I asked who he was. He replied, "Paul Rolfes. I'm an artist, and I was told to come to your gallery."

My curiosity drove me into conversation with this painted stranger, and I learned that he currently lives in Hinsdale, though is originally from Bozeman, MT. When he showed me a few photos of his work, I was impressed and invited him to be the gallery's Artist of the Month.

Paul launched his passion for art at Montana State University in photography. Two years later he moved to the Twin Cities to pursue a career in oil painting. There he worked for a gallery and learned the business of art as a career. Four years later, Paul opened his own studio in St. Paul. In 2011, he began to branch out: experimenting with spray paint, collages and cut outs.

While visiting his brother in China in 2013, Paul found himself immersed in the Chinese art culture. There he was surrounded by the demolition of the old being to make way for the new. The juxtaposition of old and new was visually exciting and presented a new challenge for Paul's art pieces of cut-outs and collages on wood planks.

Everyone is invited to meet Paul Rolfes and view his art at the Wheatgrass Arts and Gallery on October 2, 5:30-7:30 p.m. The gallery is located at 531 2nd Ave. So. in downtown Glasgow.