By Mary Honrud
For The Courier

A Time to Plant, A Time to Reap 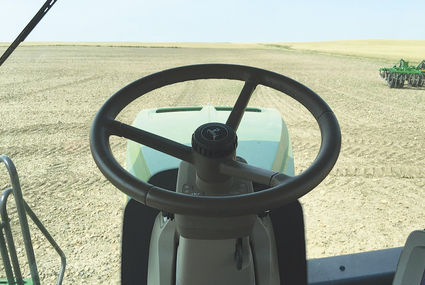 Pictured: The view from Honrud's "office" during harvest.

This is the time of year my garden gets short shrift. Every year I know it's coming, and every year I still put in a large garden. Every year I swear I'm not going to do so much, but then spring happens. You know, that time of year when hope springs eternal, and I dare to believe I will become Wonder Woman and able to do it all. Then harvest time hits, and I am Wonder Woman, wondering why did I do this to myself again?

So here I am, out in the fields, sitting in our Trac, pulling the grain cart, while my green beans get overripe! And my husband doesn't care because he doesn't eat those anyway. And I do know that our wheat harvest is more important since that is our whole year's income and the beans are just an extra. (I also know that if she lived a bit closer, one of my pretty maids, also known as Gwendolyne, would pick and eat those beans for me.)

My corn is just starting to come on, but I don't can that crop. I freeze it, using a recipe from an aunt. I'll share that recipe, as it's simple and delicious:

Freezer corn: 20 cups corn cut from the cob (about 20 ears) 1 pound butter (use the real stuff)

1 pint half and half

Put in a large roaster, and bake at 325 degrees for an hour, stirring every 15 minutes. Package and freeze quickly. Salt and pepper to taste when serving.

If you freeze the corn in vacuum-sealed bags, it keeps for over a year. I have some from two years ago, and it's still good. So it's not so important that I get any frozen this year.

Usually there will be a rainy day or two that delay the wheat harvest. I use those days to catch up in the garden. This year it happens that my husband's sister Beverly (Tade), and her husband Larry, are here staying with Mom, and they can handle the corn. But Mom has already announced she's not picking beans! I don't expect her to, either. And the bean problem is mostly my fault anyway for not getting them planted early enough this spring.

Most years they are slowing down as we enter harvest.

Most harvest days I'll have an hour or two to myself in the mornings. That's when Dennis unloads the last two truckloads of wheat from the evening before. We don't have lights at the bin sites and it's not safe to unload in the dark. Then he services the combine and refuels the Trac, if necessary. I use that time to go out and do some harvesting of my own: the tomatoes that have ripened since the day before, a few carrots for my snacking in the field, the last few raspberries, maybe a few strawberries, and I'll water my flowerpots.

This has been an odd year all the way around. It's the earliest I've had full-sized carrots and potatoes ready. The raspberries started ripening earlier than usual, and there were two shifts. The later berries were huge, but not in big numbers. And the canes are blooming again. I can hope for a really late first freeze, but I won't hold my breath on that happening. My cucumbers and summer squashes have been delayed. My asparagus suffered some failure. I'm going to have to dig out a couple sections and replant next spring.

We had that huge wind and hailstorm a few weeks ago, along with three inches of rain over those two days. Besides damaging our wheat crop (the major, costly headache), it damaged my garden. The tomatoes and green peppers that were forming at that time are pockmarked. The leaf lettuces and Swiss chard were shredded. The corn bowed down to the east, but has since stood up again. The cucumber, squash, and pumpkin plants all sport large holes in their leaves. But they are still producing for me.

I need to pull the rest of my onions to dry before the next rains hit, or they'll start to rot in the ground. The ones I've already pulled are dry and ready to be hung in the netted potato sacks I acquired when I worked at The Lefse Shack, now known as Granrud's Lefse (it's the best on the market!). I'll hang them in the garage, where they're handy, until it starts freezing in earnest. After that they go up the road to be stored in the shop at Mom's, along with the potatoes.

It's early enough in the harvest season that we still take Sundays off from work. I'm going to take a well-earned nap now. And, like my garden, finding time to write my next column will depend on how harvesting goes.