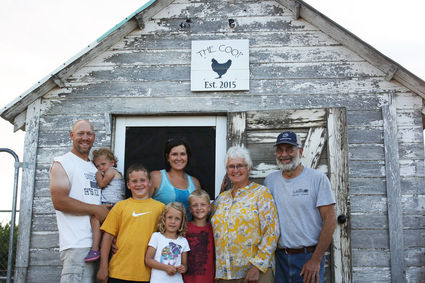 It was a warm one at Kiwanis Park for the CHS barbeque June 27. Strolling into the gathering at the invitation of the Honrud family (Opheim), I made the acquaintance of Lyle Wall.

Head of a fifth generation ranching and farming family in Lustre, Wall remarked that anyone interested in visiting a ranch currently raising the bison for hunting, meat and other products in Northeast Montana could do worse than his Five Diamonds Bison Ranch situated on Wall Street north of the school on the Fort Peck Reservation in Roosevelt County.

Heading out from Glasgow Sunday morning, your relative newcomer of a local newspaperman promptly overshot the idyllic rural community of Lustre without realizing that the well-known Wall Street wasn't actually marked with a road sign. Not realizing my mistake, I proceeded north as far as Larslan before pulling off at the shell of the once vibrant Larslan Lutheran Church, now used mainly for storage, in the hope of getting directions.

Knocking at the door of the house occupying the same lot as the church, I encountered John Regter, who owns Precision Carving, a local wood carving and duplication company.

Regter pointed me back southward with some trepidation about the fact that he was unfamiliar with my destination. Asked what community I had happened into, he answered, "It isn't really a community anymore. Hasn't been for at least 15 years."

I inquired about the cause of Larslan's decline, and he explained that most of the young people needing to maintain a sense of community-to say nothing of the labor required to eke out a living in the traditional manner-had left the area and failed to return in meaningful numbers.

Arriving in Lustre, one fact was driven home in a practical way: Where there are schools, there is community, and a potential future that includes desedents of the area's founding farmers and ranchers. In Lustre, there is a school, and hope for further generations. In Larslan, that ship seems to have sailed.

Lyle and Carla Wall greeted me at the entrance to their home at the Five Diamonds Bison Ranch, which includes more than 300 head of cattle and a small collection of yaks, as well as spring wheat and hay.

Following the lead of neighbors Dean and Julie Reddig at the nearby Montana Bison Ranch across the county line in Valley County, the Walls purchased their first 10 bison in the year 2000 for approximately $1,000 a head in trade and capital. The couple's initial calf crop was a healthy 9-10 animals. Today, the family runs approximately 100 bison in several locations.

"You gotta have good fences," Lyle explained, in the midst of a sort of Bison for Dummies short course for the uninitiated (meaning me). While touring the property, he pointed out reinforced fencing that has grown in height and durability since introducing the controversial animals.

Wall went on to detail a few other home truths that bear repeating.

"We have a saying around here," Wall pointed out with a smile. "You can make a bison do what a bison wants to do. If things don't go the way you want, we like to say, there's always tomorrow."

Asked about plans to release "wild" bison in the region, their potential impact of area ranching, the possible introduction of brucellosis, and other concerns, Lyle was emphatic.

"If you want to turn them loose here," he began, "just read the reports from Lewis and Clark about the impact of buffalo on the land and the riverbanks. Do we really want to go back to those days?"

Wall went on to question the motives of parties from out of state who want to see bison herds restored in some fashion locally by agencies with little or no practical knowledge of the local environment and economy. His concerns echo sentiments expressed almost uniformly by area residents.

Beginning in 2003, the Walls opened their bison herd up to hunting, allowing outfitters based in Hinsdale and elsewhere to bring select groups up to Lustre in pursuit of a rare trophy for their respective collections.

In 2014, the fifth generation of Walls on the ranch was increased in number with the addition of Kimberley Klatt, her husband Justyn and their four children. Kimberley drives a bus route for students at Lustre Grade School on top of her other responsibilities at the ranch. Justyn, originally from Turtle Lake, ND, also takes a hand in daily operations and is a "full proprietor," according to Lyle.

Lyle's son Ryan works in Wolf Point at Wilbur Ellis and helps out with the ranching operation seasonally.

"You know there used to be 14 Wall groups living along Wall Street," Lyle explains, adding that some were and are unrelated. "Now there's just two."

Along with ten other ranching and farming families in Lustre, the Walls are preparing to celebrate the centennial of homesteading in the area during the summer of 2016 (details TBA). The Wall ranch was founded in 1916.

Before leaving, the Wall grandchildren took pains to show off their new chicken coop while marching my basset hound around the pleasant, grassy yard that separates the original homestead where they live from Lyle and Carla's residence. If the young ones' concern for living things is any indication, the family's agricultural leanings are in good hands moving into the future.

Returning to Glasgow, I ended my journey precisely where I ought to have begun-at Harvey and Karen Wall's store, Baker's Jewelry on Hwy 2, where a hand drawn map of the Lustre area was produced that would have guided me to the former's brother's ranch without any miscalculations and happy accidents.

Unpacking from the trip, I opened a bag of frozen meat gifted to your reporter from the Walls. Within, I discovered a generous sampling of bison meat along with some beef patties and other items, calling to mind Lyle's explicit instructions for preparing bison meat. "You have to cook it low and slow," Lyle explained. "It's lean meat, so you have to take your time with it or it gets tough. We like to add pepperoncini for a little extra flavor."

Considering the pace at which the question of bison release in Valley County has been approached and considered, low and slow would be excellent watchwords for implementation of questionable plans to let Yellowstone bison loose on what has largely been ranch land for generations. In any case, readers, there will doubtless be more to come on that point before bison ranchers like the Walls have their own efforts juxtaposed by free-ranging herds.