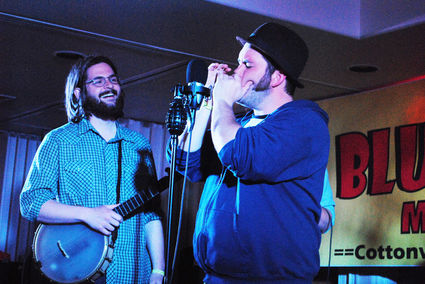 Two members of the band Horseshoes and Hand Grenades get their set started at this weekend's Blues and Brews Festival.

It's become a tradition that several locals look forward to each year to the Bonnie City Blues and Brews Festival put on by the Glasgow Chamber of Commerce and Agriculture.

This year more brews were available, over 40 different brews were on tap. Red Lodge, Meadow Lark, Uuber Brew, Madison River and more brewers had a tap with more than one brew to try.

While the crowd enjoyed their brews, they also had unlimited grazing food provided by Food Services and Sysco. The Cottonwood Inn allowed them to use their kitchen to serve brats, meatballs and more.

This year the headliner band came from Wisconsin and was a little more blue grass than blues, but they were great performers. Horseshoes and Hand Grenades had a nice sound to wrap up the evening.

The crowd seem to have a good time with The Wrench, and Downtime also made an appearance. The first set played was by a new band called Glady's and the Undertakers.

The committee for the event starting planning about six months prior to the event. The chamber said that Shawn Bergstrom, Rocky Thompson, Josh Sillerud and Zach Burner were a big help in creating this year's event, and to prior years as well.