It's Hillman For Justice, Tweten For Commissioner; Bison Ordinance Passes 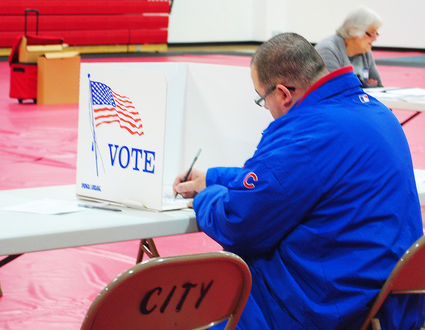 Voters, included this man at Glasgow Precinct 5, headed to the polls Tuesday to help decide some important issues and races in the mid-term elections. The Courier's election coverage is on pages 1A and 2A, along with some commentary.

As local voters headed to the polls this year there were some pretty important campaign races to decide on, as well as a few issues, such as continuing to allow late voter registration. Late voters are probably relieved about the decision made at the polls today, but several voters in Valley County voted ahead of time this year. County Clerk Lynn Nyquist sent out 2,300 absentee ballots this year and 2,130 ballots were returned by Election Day.

The unofficial vote counts are in. The county received 3,416 ballots this year.

It was a heated campaign this year for the Valley County Sheriff/Coroner position. This is the second campaign that candidate Joe Horn and incumbent Glen Meier have faced off. This election Meier took 58 percent of the votes, with 1,969 votes, to 1,378 votes for Horn. In the 2010 election, Meier took 65 percent of the vote, only losing in the Frazer district, so this election closed in the gap a little bit.

Paul Tweten will take the county commissioner district 1 seat. Just over 61 percent of Valley County voters chose Tweten, putting him over Russel Dahl for the position, with 2,010 votes to 1,245. In the 2010 election, Dave Reinhardt took the vote by 62 percent.

The last contested race was between Dave Gorton and Christina Hillman. Hillman squeaked past Gorton with 1,445 votes, or almost 45 percent, and Gorton took 1,396 votes, or just over 43 percent. Christine Gamas also campaigned for a write-in this election and was able to take close to 11 percent of the votes. Historically and statisticall,y write-in candidates rarely win.

Other candidates with positions that were non-contested who will take their seats, or continue serving are Lynn Nyquist for clerk and recorder, Brenda Anderson for county treasurer, LeRoy Kountz for the public administrator and Nick Murnion for the county attorney.

With new district lines drawn, Valley County had three district races for the state representative slots. District 33 had Mike Lang-R up against Michael Morse Finely-D. Lange took 73 percent of the votes, 950 to 348 votes. Lange took close to 71 percent of the votes for the full district, as of midnight. Lang also won in the primary earlier this year and won the 2012 election against Floyd Hopstad, who also ran in the primary and dropped out. Finely replaced Hopstad in the mid-term election.

Austin Knudsen-R won easily against Gene Hartsock-D in the mid-term election. He took just over 73 percent of the votes, 945 to 334. Knudsen took close to 76 percent of the votes, as of midnight. Knudsen who is serving in state legislature under a different district is new to the Glasgow area after the district lines were redrawn. Starting in January he'll now be serving for district 34, instead of district 36.

District 31 had Bridget Smith-D on the ballot, she was uncontested in the race. The public service commissioner was also uncontested in this race, so Travis Kavulla will continue to serve in his seat.

The ads got a little hot for supreme court candidates this year. Lawrence VanDyke was up against incumbent Mike Wheat. Wheat took just over 55 percent of the votes, or 1,610 to 1,284. Wheat was appointed in 2010 to the position and previously served on the state senate. Wheat was also favored by Valley County voters in the primary. As of midnight, the Secretary of State reported close to 60 percent approval for Wheat over VanDyke.

Incumbent James Rice went up against David Herbert and the voters in Valley County decided to keep Rice in the seat by a whopping 81 percent, or 2,342 votes to 530. Rice was also favored in the primary. Statewide Rice had close to 79 percent of the votes as of midnight.

It was a very active campaigning year for U.S. Congress and U.S. Senate seats in Montana this year. At times it was hard to keep up with all the changes, blame games and political plays this mid-term election.

Steve Daines-R made Montana history tonight, being the first Republican to be elected to a U.S. Senate seat in over 100 years. Daines took just over 65 percent of the vote in the county against Curtis, or 2,192 votes to 1,055. As of midnight, unofficial results according to the Secretary of State posted that Daines was favored by just over 57 percent of the state votes. Curtis took up the race after Senator John Walsh stepped down from the election after a plagiarism issue that came up. Libertarian Roger Roots collected 85 votes, or just over 2 percent, in the county. Roots also took close to 2 percent of the votes in the state.

It was a landslide vote in Valley County for Ryan Zinke-R in Valley County over John Lewis-D. Zinke took close to two-thirds of the votes against Lewis in the county, or 2,077 to 1,064 votes. Zinke took a closer vote statewide, with around 55 percent of voters approving. Libertarian candidate Mike Fellows collected 171 votes, or 5 percent, for the county, and about 4 percent of the votes stattewide.

Voters approved the Valley County Conservation District bison ordinance by a landslide. Seventy-four percent of the voters approved, or 1,323 votes for it, 452 against it. The ordinance will allow the conservation district to require a permit for bison in order to protect soil and water from free roaming bison.

It was a pretty close vote for the highway Levee this year. So close that it's easy to say that voters are almost split down the middle in support of continuing funding for a Levee that has been passed five times before. The Levee wasn't approved this year, nearly 49 percent approved, while 51 percent were against it, or 782 to 828 votes. The Levee would have raised an additional 10 mills to help maintain county roads.

And finally for those late registering voters. Valley County voters think that you should be able to register the day you come to the polls. Voters said no to the change, around 55 percent of them, or 1,799 to 1,440 votes. It was pretty close to what the statewide votes reflected as of midnight, around 57 percent of the voters opposed the change. The legislation would change the deadline for voters to register up to the poll closing time on Election Day to the 5 p.m. on the Friday prior to the election.

The argument was that it would protect the integrity of elections and ensure compliance with the National Voter Registration Act. The other side argued that this is an attack on voter rights. Currently if you miss the regular registration deadline for voting (30 days before an election) you can register to vote up to the closing of the polls. In the state house vote 58 percent approved, in the state senate just over 59 percent approved.