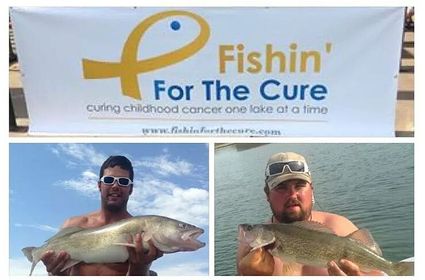 Kirk Boyer, right, and Adam Morehouse of Glasgow placed second in the walleye competition with 20.98 pounds.

The event on Aug. 16 at Rock Creek Marina on Fort Peck Lake was attended and supported by nearly 200 gracious people – with 38 fishing teams and 107 fishermen – helping raise money for childhood cancer research.

The Larry Mindt team of Sidney caught the largest Walleye at 12.38 pounds.

Second place:  Reg and Jordan Gibbs of Billings with 37.8 pounds.

The Eddie Mindt team of Lambert reeled in the largest Northern at 15.1 pounds.

In addition to the fishing derby, an event called "Be Brave and Shave" was held, where children and adults collected donations to shave their heads to raise awareness for childhood cancer.

On the roster was Mikayla Sky Prescot of Fort Peck, who followed in her sister's footsteps from last year.  She was joined by Kale Fasting of Bozeman, and Laiken Oellerman of Glendive, as well as Gloria Hungate of Stanford. Gloria and a few friends have been faithfully manning a lemonade stand at the local farmers markets throughout the year to raise money for donations.

Many other supporters led fundraising efforts prior to the derby, including Team Tate of Glendive, which held a bake sale in honor of friend and classmate Tate Beggar who lost his life to childhood cancer. Several others held garage sales, set up lemonade stands, and two little boys even had their birthday guests bring donations for FFTC instead of presents.

The total fundraising efforts of this year's derby yielded more than $29.000. With the incredible support, Fishin for the Cure is able to help fund the most promising research grants to help find new treatments, and hopefully a cure, for a disease which claims seven children every day.

Lynnette Siegle, mother of Matt Siegle and Secretary of FFTC, said, "Our goal is to cure childhood cancer one lake at a time. We have expanded our dream to include tournaments in North Dakota and Arizona."